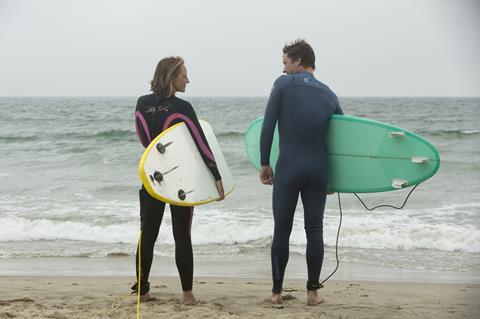 Taken purely from the perspective of the marketplace, Ride is an interesting experiment. Written and directed by Helen Hunt (Mad About You), it’s a comedy about a neurotic New York mother who follows her 20-year-old son (Brenton Thwaites) across the US to Venice Beach, California. When she takes up surfing to impress him, she finds her inner peace; it’s like Gidget Grows Up, or an older Eat, Pray, Love .

Hunt’s own character Jackie, a neurotic workaholic New York editor, is a clichéd control freak who needs to learn to let go, ushering in some very predictable story beats as she falls off her board, has sex with her instructor, and smokes pot.

Not many films are made for the 40/50-something Mom crowd, unless you count the musical hit Mamma Mia! And while Ride – which will need to be re-titled in international markets where it has an alternative meaning – has its problems, it could fill a void and enjoy an endless summer on VOD when it is released May 1 in the US (simultaneous with theatrical) via Screen Media Films. It has sold well in overseas markets including Lionsgate in the UK.

The on-demand home audience may be more forgiving of Ride’s stumbles; it is awkwardly-written, and Hunt’s own character Jackie, a neurotic workaholic New York editor, is a clichéd control freak who needs to learn to let go, ushering in some very predictable story beats as she falls off her board, has sex with her instructor (Luke Wilson), and smokes pot. The jokes can be hit-and-miss. Cinematography, though, via Jas Shelton, has a lovely flow; Los Angles looks alluring from Hunt’s directorial perspective and young Australian actor Brenton Thwaites is there to make this a family home-viewing prospect.

It has been almost 16 years since her TV hit Mad About You came to an end and Helen Hunt has remained relatively quiet since then, emerging to direct Then She Found Me (which she also co-wrote and starred in) in 2007. There she played a woman whose husband has left her; in Ride, she’s also a single parent, of 20-year-old Angelo (Thwaites), who seems to live a fairly miserable existence as her henpecked son. Their bickering is cut short when he decides to drop out of college and join his father (Robert Knepper), sexy step-mother and much-younger step-sister in Los Angeles. Jackie decides to pursue him, employing a genial limousine driver (David Zayas) to tail him around the city’s beaches, presented here in an idyllic light.

Jackie is controlling, over-bearing in fact, and the reason why only becomes clear later on in the piece. Her endless texting and phone calls are trying for the viewer, if not Angelo. It’s only when she attempts to surf with instructor Luke Wilson that she begins to understand that she needs to let go. Ride is at its best and most authentic in its final chapter and an inconclusive resolution, but not so sure-footed in how it gets there.

Hunt is appropriately shrill and brittle as Jackie, but awards herself far too few scenes where her character relaxes and gets to have fun; a grammar obsessive, Jackie gets all the film’s one-liners (which sometime fail to zing), while Zayas, Wilson and Thwaites are her genial wingmen, making the film softer than it might otherwise have felt.

While the production is restrained in New York sequences, Ride really does come to visual life in its final scenes. It isn’t, as might have been anticipated, a surf showcase, or a vehicle for Hunt to flash her form. Instead, it slides into an unshowy elegance, making Jackie’s decision all the more understandable. Ride’s visual smoothness underscores Hunt’s increasing comfort behind the camera, although she, too, might have benefitted from cutting back on control and some of her many roles in this piece.