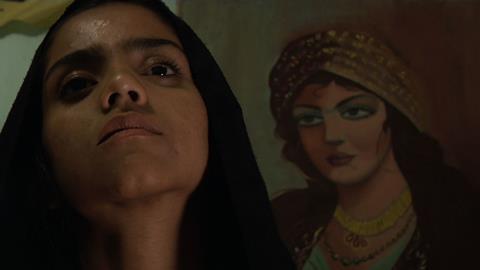 As documentary-makers grow ever-closer to their subjects, Sonita enters the realm of complete co-dependency; this story of a young Afghami refugee’s determination to sing and be free would not have concluded this way without director Rokhsareh Ghaem Maghami’s decision to take an active part in proceedings. She has a film, but, personally, a lot more. The tale of Sonita Alizadeh is now Maghami’s responsibility too.

Sonita has no passport, no papers, no right to be anywhere

Premiering in competition at Amsterdam’s IDFA, Sonita is an intriguing and troubling – on many levels - documentary which should provoke debate amongst professionals and a great degree of sympathy with all viewers. Festival slots seem assured. Of note is the spirit and complexity of its all-female cast. This may concern a part of the world which binds women as goods – the film’s main dramatic thrust is the proposed cash sale of Sonita as a bride – but their combined strength and humanity is deeply affecting.

Sonita is a determined, feisty, 18 year-old Afghan refugee living in Tehran in a single shabby room with her sister and niece when Maghami’s camera comes to visit. This is presumably through a connection with the Tehran Society for the Protection of Work and Street Children, an NGO which sponsors, educates and tries to soothe the wanna-be rapper’s damaged soul. Her flight from Afghanistan was not easy, and neither is her life now. Yet Sonita is popular, vocal, and practically alone in the world, seemingly responsible for her family’s accommodation and sustenance.

Sonita has no passport, no papers, no right to be anywhere. She hasn’t seen her mother in eight years. She’d like to be called Sonita Jackson, with Michael as her father and Rihanna as her mother. At the heart of the film is her rap about freedom, which she passionately believes in – she feels that things will change if only people can hear what she has to say, and her belief is one of the film’s most touching moments. Will it prove to be true?

But even if Sonita had permission to live in Iran, she still wouldn’t be allowed to rap. And her family wants to sell her in marriage for $9,000 to fund her older brother’s dowry. Soon, her tough-as-nails mother arrives back from Herat in full crow garb, set on extracting a price.

“Would you buy me?” Sonita asks Maghami. “I am for sale anyway.”

What happens next changes everything, as Maghami becomes more and more involved in Sonita’s story and the twists and turns grow ever more uneasy as the line between them diminishes. Of special interest is the democratic potential afforded to Sonita by the internet, even if her message is being sent from the most troubled of circumstances (footage of her video playing out in her dismal room underline the chasm between reality and flickering image). Soon Sonita has, literally, become a poster girl.

Everyone falls a little in love with Sonita in this film, and audiences should follow suit. From nothing, she has made a family of sorts, and the head of the NGO has become her substitute mother. No matter what happens to her, Sonita is going to have to leave them all behind. Maghami finds it hard to conclude her first full-length documentary in a way that doesn’t open questions about her own role which she fails to address. And Sonita, perhaps, is even more alone, with the internet’s embrace potentially a hollow one.

Only time will tell. And, perhaps, another documentary.