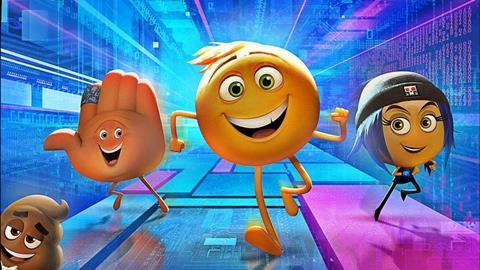 A film as mindless and disposable as most smartphone apps — and nowhere near as addictive — Sony’s animated The Emoji Movie is a calamitous comedy that inadvertently shows how difficult it is to pull off the witty, imaginative world-building that Pixar makes seem so breezy. Despite wanly espousing the importance of individuality, this anonymous product couldn’t feel more strained or cautious, playing down to its childhood audience while offering plenty of screen time to the myriad brands featured in this movie-length advertisement.

Because people spend so much time on their smartphones, there’s certainly rich comedic potential in satirising the world inside our most intimate technological tool — but this slack comedy never finds it

The Emoji Movie hits US theatres July 28 and the UK the following weekend, hoping that enough families have already seen Despicable Me 3 that they’ll be ready to sample other animated fare. A voice cast that includes James Corden, Anna Faris and Patrick Stewart will have some international appeal, and certainly the target audience will be familiar with the film’s popular, playful mobile phone communication tool. But pitiful reviews may dampen commercial prospects for a movie that probably won’t cross over to childless adults.

T.J. Miller voices Gene, an emoji who lives in Textopolis, the massive city inside a high school boy’s smartphone where all emojis reside. Gene is a designated “meh,” which means his job is to signify disinterest if his human owner ever selects that particular emoji when texting friends. But he’s uncomfortable in the role, feeling far more vivacious and emotional than his assigned facial expression. Convinced there’s something defective with Gene, Textopolis’ sinister boss Smiler (voiced by Maya Rudolph) orders him terminated, which forces Gene and his new friend Hi-5 (voiced by Corden) to go on the run, journeying through their human’s cell phone in the hopes of finding a mysterious hacker who can help them.

Directed by Tony Leondis (Igor), The Emoji Movie shares nagging similarities with animated films such as Pixar’s Inside Out and Disney’s Wreck-It Ralph in which the inner workings of, respectively, the human mind and a video game are turned into an elaborate ecosystem filled with personalities. Because people spend so much time on their smartphones, there’s certainly rich comedic potential in satirising the world inside our most intimate technological tool — but this slack comedy never finds it.

The problems start with the main characters. Gene seems a nice enough fellow, but his unhappiness about having to be “meh” all the time isn’t a particularly poignant obstacle. Beyond that, he’s neither lovable nor funny — as it turns out, his personality is actually deeply “meh.” Still, that’s preferable to Hi-5, a vain emoji who has seen his popularity diminish and is voiced by Corden with such cringe-worthy cutesiness that he becomes actively irritating.

The trio includes Anna Faris as Jailbreak, the hacker with a secret that ties into Gene’s own desire to find his true self. But where Sony’s animation competitors invest their characters with thoughtful emotional arcs and deft narrative journeys, The Emoji Movie loads viewers down with glib bromides and obvious pop-culture referencing which is never sharp and often deeply pandering.

Of a large ensemble, Rudolph comes across best, giving the maniacally all-smiles Smiler a creepy menace underneath. It’s a rare display of wit in a movie that tends to choose the easiest gag and run it into the ground. (Look no further than the one-joke casting of a refined English actor like Patrick Stewart to voice the Poop emoji.) Even the secret world inside our smartphones is conceived without much inventiveness. Production designer Carlos Zaragoza throws plenty of bright colours and other visual busyness across the screen as Gene goes from one realm to another, but little of it leaves an impression. Ironic that, in a film featuring countless expressive digital faces, The Emoji Movie’s lack of inspiration is beyond words.