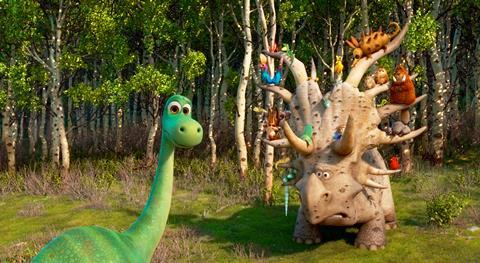 In some ways, The Good Dinosaur is one of Pixar’s most conventional films, telling a simplistic coming-of-age story about a young Apatosaurus on a hero’s journey to return to his family while grieving the death of his beloved father. But that template sets the stage for a mythic, visually resplendent treatment of familiar material, as first-time feature director Peter Sohn wrings considerable emotion from a tale that’s part Western, part Incredible Journey-style adventure.

The Good Dinosaur may be Pixar’s most purely cinematic film

Geared to kids but sneaking in a few daringly dark moments, The Good Dinosaur may not be among the list of the studio’s truly inspired productions, but 20 years after Toy Story, it’s encouraging to see Pixar continue to tinker so audaciously with its approach.

Sure to be a massive family hit when it lands in theatres around the world from November 25, this Disney offering might skew slightly younger than other Pixar films, which isn’t to suggest that adults won’t find plenty to enjoy as well. And considering that Jurassic World is the year’s biggest money-maker, audience appetite for more dinosaurs could benefit this film, with word-of-mouth and rosy reviews only helping the haul.

The Good Dinosaur starts by introducing its conceit: what if, 65 million years ago, a meteor didn’t hit Earth, ending the age of dinosaurs? From there, Sohn establishes a world in which a family of Apatosauruses (led by Poppa, voiced by Jeffrey Wright) are busy running their farm. The youngest of three children, pipsqueak Arlo (voiced by Raymond Ochoa), wants to prove himself worthy of more responsibility, but soon tragedy strikes when a powerful flood sweeps Poppa away to his death. Arlo blames it all on a lone feral human boy (voiced by Jack Bright) who had been pestering the famil, but when he gets lost, only the boy (whom he names Spot) can help him get home.

At first, the film drifts along on its sweetness, establishing Arlo’s carefree world with his doting parents and tranquil life on the farm. Suggesting that The Good Dinosaur means to be a straightforward children’s fable with easy-to-glean life lessons, Arlo is told early on by his father that he needs to demonstrate courage and self-sacrifice to make his mark on the world: words of advice we’re sure will be integral to Arlo’s dramatic through-line.

The narrative simplicity doesn’t end there, though, as Arlo soon loses his father in a tragedy, forcing him to grow up and step out of his dad’s shadow. Even his begrudging friendship with the growling, wordless Spot has a textbook boy-and-his-dog quality to it. (This feeling is helped by the fact Spot acts just like a barking puppy.)

But although the humour can be inconsistent and the plot points a little obvious, The Good Dinosaur mostly transcends the archetypal storytelling by delivering a steady stream of simply stunning sequences. By now, it might be a given that Pixar’s movies are visually spectacular, but The Good Dinosaur may be the studio’s most purely cinematic, the richness of the design and the emotional power of the widescreen compositions stirring deep, almost primal feelings about childhood, the loss of innocence and the untamed ferocity of the natural world.

In part, the film is so potently evocative precisely because the script is so rudimentary, the on-the-nose dialogue and familiar thematic undertones a steady foundation upon which to build a collection of potent, beautiful images.

Somewhat imperfectly, Sohn toys with how much darkness he can introduce in a kids’ film. Beyond the death of Arlo’s father — hardly the first time a parent has perished in a Disney film — the movie is also blunt about mortality, with different anonymous animals and insects dying in matter-of-fact ways over the course of The Good Dinosaur. Arlo will encounter rampaging pterodactyls and treacherous storms, and Sohn gives them enough force to be upsetting without traumatising young children.

To be sure, Arlo isn’t a particularly funny or engaging protagonist. Granted, he’s meant to be an ineffectual kid at the cusp of dinosaur adolescence, but he’s not given the complexity of other Pixar leads. (By comparison, Spot is nothing but a loyal pet, the filmmakers probably trying too hard to make him cutie-pie adorable.) But The Good Dinosaur, unlike most Pixar efforts, seems to be more focused on its milieu, and the animators do such marvellous work it’s hard to complain.

After the nifty, zigzagging action-comedy scripts that have been the studio’s forte, it’s refreshing to see Sohn (along with credited screenwriter Meg LeFauve) concentrate on an enveloping environment that’s far more compelling and magical than the characters are.

Along those lines, the unnamed area where the film takes place, meant to be inspired by the American Northwest, has a stunning photorealistic quality, the wide open spaces, flowing rivers and majestic mountaintops utterly lifelike. Aided by Sharon Calahan, the director of photography-lighting, and Mahyar Abousaeedi, the director of photography-camera, The Good Dinosaur grounds its fantastical story in stunning realism, which makes the image of, say, a longhorn cattle run overseen by Tyrannosaurus Rexes so indelible.

If it’s not too hard to predict where The Good Dinosaur is headed as Arlo makes his way home, the film is nonetheless incredibly poignant, sounding recognisable but still affecting notes about family, friendship and maturity. Credit, too, goes to a nervy score by Mychael Danna and Jeff Danna, which mixes strains of country, Native American music and more traditional orchestral soundtrack. The juxtaposition might seem odd on occasion, but like the film in general, it’s proof that Pixar refuses to go on autopilot, pushing its artists into new, and sometimes quite rewarding, terrain.