'The King of the Belgians': Venice Review 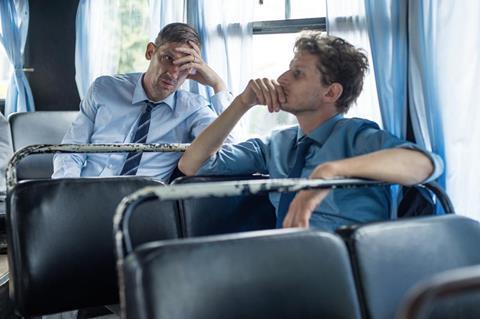 This feather-light pseudo-mockumentary road movie was evidently inspired by the Icelandic volcano eruption which blocked all air traffic over Europe in the spring of 2010. A fictional Belgian King (Peter van der Begin) on an official visit to Istanbul is grounded there while back home, Wallonia declares its independence and Belgium is on the point of falling apart. Since the Turks won’t let him out for security reasons, the King’s only way to rush home and save his kingdom is an illicit escape through the Balkans.

Now on their fifth film together, the Brosens-Woodworth double act has shown in the past a predilection for faraway locations, from Latin America (Altiplano), or Mongolia (Khadak) . This time, while once again keeping their distance from home, there Is no real attempt to use the Balkans as more than just a colorful backdrop to send up typical Belgian issues such as the conflict between the French and the Flemish communities, the role of the monarchy or the plague of bureaucracy. It’s done in a gentle, harmless manner, no one is hurt, no blood is drawn and no sweeping statements are made.

Probably too unassuming to claim a long festival career, this could still do quite well in a modest way in European territories, particularly those familiar with Belgian issues.

Tall, gangly van der Begin, whose profile is not unlike that of the late General de Gaulle, plays the mild-nannered, bemused King Nicolas the Third of Belgium, who is dispatched by his over-assertive Queen (practically never seen but omnipresent on the phone) to visit Turkey on the occasion of that country’s (ficticious) entry into the EU.

For the film’s purposes and to keep the expenses down, the King’s entire retinue on this particular trip is reduced to four: a bespectacled official adviser Ludovic Moreau (Bruno Georis); the high-heeled, smartly tailored Louise (Lucie Debay), who is in charge of protocol; the King’s personal valet and occasional confidant, Carlos (Titus de Voogdt); and the chubby, long-haired, resourceful British filmmaker, Duncan Lloyd (Pieter van der Houwen), hired for the occasion to document the King’s travels.

When the news from home makes it imperative for the King to return but he cannot move due to the Icelandic volcano, it is Duncan whose experiences as war correspondent and paparazzo has trained him to deal with extraordinary circumstances, who comes up with the solution. He suggests they join a female choir from Bulgaria calling itself the Sirens of the Black Sea and hide in the tour bus as they return home, thus taking the first step westward. Putting a king in drag is no doubt unceremonious, but the trick works and for the rest of the trip, it will be Duncan who saves the day time and again.

Along the way, from a yoghurt festival in Bulgaria to a rakia-filled drunken Serbian night in the company of a rowdy former sharpshooter still haunted by his past, the officious barriers between the members of this small party crumble one after the other. In the process, the King has enough time to grow from being a ceremonial puppet into becoming his own man, writing his own speeches and not even consulting the Prime Minister before delivering them.

Looking for all purposes like the final copy of Duncan Lloyd’s documentary, the entire picture is supposed to show only the images captured by Lloyd’s ever present single camera, always on, day and night, at the right moments and the wrong ones.

The soundtrack consists mostly of bantering conversation between Lloyd and the other four members of the cast, with Grieg, Ravel, Bach and Vivaldi boosting spirits along the way. The cast does well with its semi-improvised dialogue. Best among them is Peter van der Begin, who gives his King a kind of simple natural allure that suggest monarchs can be human if you take them out of their palaces.

Sales: Be For Films (pamela@beforfilms.com)