Loud and proud, the fifth instalment in the $3.8 billion franchise is back looking for trouble 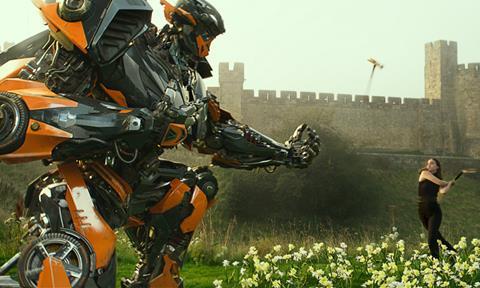 The end of the world can’t come soon enough in Transformers: The Last Knight, the fifth instalment of a franchise in which the stakes always concern the fate of the planet but the consequences rarely seem that grave. Michael Bay provides his usual orgiastic action sequences, but this series’ tone-deaf humour and dull nods to selfless heroism have become toxic irritants — a sensation not helped by the film’s collection of clattering, joyless robots and dopey humans.

The Last Knight is a battering ram of convoluted storytelling, cheap sensation and even cheaper sentiment

Opening across much of the globe from June 21, this Paramount offering will hope that, 10 years after the first film, there’s still a large audience for a franchise that has generated almost $3.8bn worldwide. Mark Wahlberg is back for his second Transformers go-round, but the sequel’s clear stars are the extra-terrestrial robots and Bay’s alienating pyrotechnics.

Picking up the action where 2014’s Transformers: Age Of Extinction left off, The Last Knight reveals that the war between Transformers and humans has only intensified, forcing the heroic Autobots to go into hiding while their valiant leader Optimus Prime (voiced by Peter Cullen) returns to their abandoned home planet to see if it can be revived.

Bay has long valued the sensuous rush of adrenalised set pieces — sleek car chases, bombastic shootouts, scenes of widespread destruction — over character work or emotional nuance. But even by his brute-force standards, The Last Knight is a battering ram of convoluted storytelling, cheap sensation and even cheaper sentiment. By any measurement, he remains an impassioned craftsman of choreographed carnage, but it’s in service to such ciphers posing as characters that the technical proficiency doesn’t mean much.

Wahlberg and Haddock are trapped portraying a tired cinematic trope — the opposites-attract pair who, at first, can’t stand each other but will eventually discover a growing sexual tension blossoming from their endless bickering. In comedies, Wahlberg is adept at playing frustrated regular guys, but for a second straight Transformers film, his rugged charisma is no match for Bay’s tiring pace and simplistic humour. Worse, the actor has little chemistry with Haddock, who must suffer the indignity of being the latest beauty in a Bay movie who must stroll around in tight, revealing outfits for purely prurient reasons.

The Last Knight’s handful of writers and six editors stitch a story out of disparate genres — the Arthurian drama, the war film, the submarine thriller, the National Treasure-like puzzle movie — to create yet another scenario in which the Autobots face off against the dastardly Decepticons, while all of humanity fears for the safety of its species. Bay has repeatedly destroyed large swathes of the planet in his films, so at this late date it’s hard to invest in yet another cataclysmic climax — especially when Optimus Prime, once again, declares in earnest tones that people and Transformers can learn to work together to defeat evil and reach our highest ideals.

Because Bay enjoys pitching his movies at such a heightened, visceral level, his ensembles often respond by delivering wincingly broad performances. Hopkins, who needs little excuse to ham it up, plays Burton with plenty of twinkle in his eye, providing every bit of torturously expositional dialogue with a cheeky refinement that mocks the film’s junk-food aesthetic. Similarly, everyone from John Goodman (as a cigar-chomping, machine-gun-toting Autobot) to Stanley Tucci (as, inexplicably, a deeply flawed Merlin) lets loose with turns that are initially amusing but eventually curdle into shtick.

Based on Hasbro’s popular toys, the Transformers films have never done a great job of highlighting the robots that inspired the franchise. Outside of Prime, the Autobots tend to be tiresome types, sporting annoying catch phrases or forgettable quirks, while the Decepticons are evil in the blandest ways imaginable. The effects work to render these metallic characters has improved significantly in the last 10 years, resulting in more articulate facial expressions. But, ultimately, they’re just cumbersome objects Bay crashes into one another to produce cacophonous mayhem.