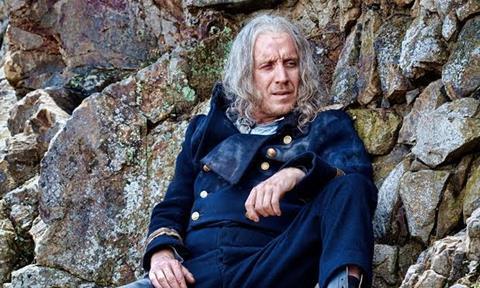 Dylan Thomas described his most famous work, the bawdy, earthy radio play Under Milk Wood as ‘strangely simple and simply strange’. This surreal, formally complex and cluttered adaptation from director Kevin Allen places the emphasis on strange rather than the simple.

The heady dreamscape that Allen creates in a fluid series of vignettes explores the symbolic and the salacious undercurrent in Thomas’ writing rather than opting for a more literal interpretation.

This version, the second film adaptation of Thomas’ iconic work, is abridged and streamlined for the screen. The heady dreamscape that Allen creates in a fluid series of vignettes explores the symbolic and the salacious undercurrent in Thomas’ writing rather than opting for a more literal interpretation. The result is sticky mess of sexual urges and intrigue, but one which clouds Thomas’ work rather than clarifies it.

Arthouse audience interest might be piqued by the fact that Under Milk Wood is the UK submission for the foreign language Oscar race. It should be noted, however, that two versions of the same film were shot back to back, one in Welsh (titled Dan y Wenallt) and one in English. The version getting a UK release - and the version reviewed here - is the English-language option, and subsequently not the version which is in Oscar contention. (The film, which premiered at the Edinburgh International Film Festival in June, hits UK cinemas on Oct 30.)

Theatrical prospects within the British Isles are uncertain, and outside altogether more challenging. Although the robust sensuality and poetic sensibility might connect with adventurous audiences, the density and complexity of Thomas’ writing - ever present throughout the film as a voiceover - might prove something of a subtitling challenge for non-English speaking territories. There’s also the problem that Thomas’ gorgeous writing is definitely the star here; the visual component to this poem of images is frequently distracting and sometimes outright unpleasant.

The film is set over 24 hours in a ’ backwater of life’, the decaying Welsh fishing village of Llareggub (‘Bugger all’ spelled backwards). Water imagery is ubiquitous, particularly in the first 30 minutes, which sees the residents swimming through the murky depths of their subconscious.

The blind seaman Captain Cat (Rhys Ifans, sporting the kind of sideburns that speak of unrequited love and poor personal hygiene), sees the faces of his drowned shipmates and his dead lover at night when he sleeps. Mog Edwards (Steffan Rhodri) the draper dreams a song and dance routine with Myfanwy Price (Nia Robert), the woman he loves from a safe distance. Polly Garter (Charlotte Church), local beauty and loose woman, dreams of babies and the men who fathered them. And Allen chucks in lots of symbolic imagery: crabs, jellyfish, floating candles in chamber pots and innumerable shots of broken, discarded toys.

Once day breaks, the submarine palette of ghostly blues and greens gives way to a supersaturated look which favours plenty of showily overt reds and pinks. This, coupled with the 1950s styling, gives the film a heightened, hyper-real tone. But the strident visual tone doesn’t always gel with the spoken words that guide us through village life. The screenwriters - poet Murray Lachlan Young, symbolism expert Michael Breen and Allen - approach the work with obvious reverence, but, together with cinematographer Andy Hollis, they fail to make a persuasive case that this is a work that needs to be seen as well as heard.