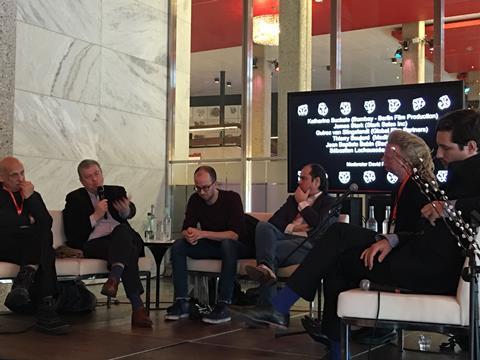 “Let’s be honest here. If you can avoid hard money, then do it,” said Backup Media’s Jean Baptiste Babin.

“European producers think of financing as a banking job: you are loaned the money [from the state], and there’s no backend or equity,” said Paris-based Babin.

“But if a private investor comes on board - they can recoup a premium up to 125% of the production budget and 40-50% of the backend.”

“The Dutch Film Fund don’t know how to act when an international co-producer comes on board. They don’t understand the private equity system, and don’t want to deal with it.”

Paris-based lawyer Sebastien Lechaussee of L’Avocat also warned of equity investment: “Even if you have an agreement signed, it’s not guaranteed the money will arrive in your bank account at a certain time. This is challenging when the film is in production. You wait and wait and then nothing. It can leave you iwith expensive last minute solutions.”

“While European money [from government funds] is definitely the least risky, at the same time, they [using Eurimage as an example] are starting to tighten their strings, behaving like a traditional gap fund where they want to recoup first before any other investors.

“Whereas in the US, film financing structures like state-supported tax incentives are getting softer and softer.”

He cited Still Alice as an example that was fully financed through BSM Studio, Backup Media and Marie Savarepart’s one-stop-shop financing venture. Investment included a combination of US private equity and taxpayer-funding via New York’s Empire State Development Corp, as well as European backing from French lending institution Cofiloisirs.

“Everything is shifting - we have to be more open how we put financing deals together in Europe.”

New York producer James Stark (Starksales Inc) also attested he was not in favour of hard money, or private equity; but that in the US, it’s often unavoidable.

“I’m not a huge fan of private equity for obvious reasons. But in America, you often have to use private money to fill the gaps for cash flow, whether at the start to help get the project off the ground or at the end to assist with post production.”

He used Mexico as an example, where the government offers “essentially an individual tax credit”, likening it to a similar funding model in Brazil.

“Both the film commission and governing tax bodies must approve your project. Once approved, you can go to individuals and corporations for funding. Instead of paying 100 pesos to the government, they can put that money into your film, receiving a 1:1 tax credit. There is typically no renumeration - it’s purely soft money.”

“Because we are not a big studio, we must each time convince Indian investors this is a project where there money will be recouped. That is the bottom line.”

The producer also said securing Indian financing was time consuming as they don’t read scripts; often requiring the director to re-enact the script via a series of meetings.

Finding foreign investment including US private equity has helped Suckale bring the independent, non-Bollywood projects to wider audiences including international festivals, which has then helped bring additional Indian investors on board.

From the Americas, Asia, Australia and Europe, the private equity company’s focus is to offer a wide range of films across all genres with different budget sizes.

“What we mostly want is a good grasp of control. If we make offers to investors and safeguard their money with a bit of premium, we need some kind of control over production. We do this by working with producers for which we have a stake. In a sense, we operate as co-producers.”

Thierry Baujard, a private equity consultant at Paris-based Media Deals, said the company is focused around bringing investors together first, and then trying to find the right projects with the right producers.

“For us, it’s about the investors, many of whom seem to have a technology background. Without investors, a film can’t be made.”

Additionally, the company is building up its ancillary investment with music content, rights and streaming services.

Stark added most investors just want to know you have a good product, and there is something in it for them.

The producer, who works on “very modest budgets” with lesser known actors and filmmakers, said often enticing investors with invitations to Cannes or Berlin, or the film’s premiere, was enough of a hook to get them interested.

When asked what budget sizes were recommended, a range of answers were given.

Babin said there was no “one size fits all”, but did ascertain most of their budgets range from €20-25m. For independent, commercial-driven films, he said the “sweet spot” was €7-12m.

Van Slingelandt also reiterated their budgets were wide-ranging, but estimated up to €50m for bigger action films, €2m for the horror genre and smaller drama/comedies around €7m.

Suckale suggested around €25-40m if there is a big action star attached, but as with most of the independent films she works on, she as well as Stark, reiterated “cheap and good”.

“You must make it transparent to the investors how they will recoup their money. If there is no star attached, and in India, where the producers are required to pay for marketing and promotion, it’s important that you keep costs low.”

“Raise what you can raise - but make sure the product is quality,” added Stark.