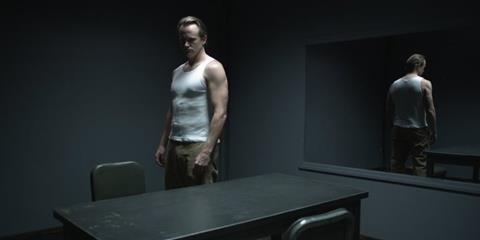 The way it keeps its audience on edge and slightly confused is part of the format as Simon Arthur sets about his own clever bit of film deception.

Developed from Arthur’s 2007 short film of the same name, Silver Tongues was an audience award winner at Slamdance and is currently playing at other festivals. It has the sophistication, intelligence and dark deviousness to appeal to indie distributors with the festival circuit an alternate distribution option.

The story is based around a series of vignettes as Gerry (Lee Tergesen) and Joan (Enid Graham) set about creating random scenarios and manipulating various people. Not for financial gain, their dark games are simply for the devilment, deception and an underlying sexual gratification.

Their manipulations range from the corruption of a pair of newly-weds into making them embrace the idea of partner-swapping through to convincing an aged man in an old people’s home that they are his children. Some work better than others - with a section in a church the least convincing – but Arthur keeps things unrevealed right up till the final scenes, with scenes in a police station with Gerry accused of murder especially good.

The dynamic of their relationship as they engage on their oddball road-trip is perhaps the most interesting aspect of the film as subtle sado-masochistic aspects are gradually revealed…not in an overtly or explicit sexual way, but just how they get their kicks through variations of control.

The pacing of the film may be problematic for some, but the way it keeps its audience on edge and slightly confused is part of the format as Simon Arthur sets about his own clever bit of film deception.

The performances are pretty good. Lee Tergesen is especially fine as Gerry and some of the support cast offers nice virtual cameo performances, with Rosa Arredondo impressive as the small-town cop who attempts her own bit of manipulate of Gerry during his interrogation.