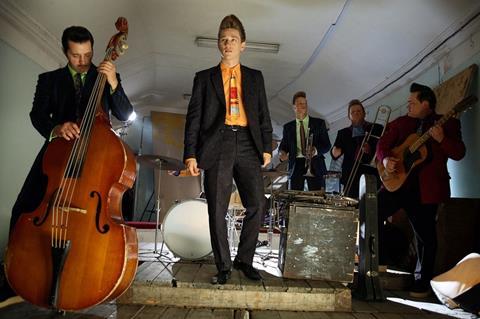 A portrait of a grim period, Hipsters is almost a Russian version of Grease - as fanciful and unrealistic as its American counterpart, but with more of a political subtext to sustain it. It’s set way back in 1955, when, in an attempt to establish their independence against the backdrop of grey uniformity surrounding them, young Russian rebels (“hipsters”) copied American fashions, hairdos and slang.  Featuring a cast of young energetic hopefuls and several seasoned veterans in cameo roles (Sergey Garmash, Oleg Yankovsky), critics might carp that Hipsters offers perhaps an overly gentle and forgiving image of that time, hiding behind colorful sets and costumes which border on caricature. But general audiences are likely to be much more forgiving.

Hipsters centres around a shy, nerdy Communist youth (komsomolchik) called Mels, played by Anton Shagin, who falls for luscious blonde hipster Polya (Akinshina) and turns his back on his pretty but strict brigade commander girlfriend (Brik). He takes up the tenor saxophone instead, raises some hell of his own and ends up marrying his blonde bombshell and even having an unlikely child with her before Todorovsky wraps it all up in a rousing finale.

Hipsters’ score, a lively mélange of updated Soviet hits and fresh numbers written specially for the film, pumps away energetically, while clever art direction blends real-life locations with studio sets to create a world apart. Throughout it all, the cast seems to be having the time of its life.