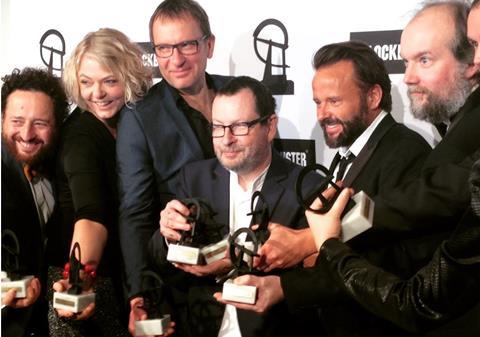 Lars von Trier has once more broken his “vow of silence” to accept an armful of prizes at Denmark’s Robert awards.

The controversial Danish filmmaker’s Nymphomaniac: Director’s Cut scooped eight trophies including best feature and best director at the Danish Film Academy’s awards last night (Feb 1) – and von Trier was in attendance at the ceremony for the first time.

Accepting the Robert for best feature, von Trier said: “From Peter Aalbæk Jensen (his producing partner at Zentropa Entertainments), I know that some of the Robert awards are won by five votes, so I would like to thank those five persons in the auditorium. Thank you very much.”

The director of Antichrist and Dancer in the Dark has rarely spoken in public after being expelled from the Cannes Film Festival in 2011, where he brought Melancholia, after publicly joking that he was a Nazi and “sympathized with Hitler a little bit”.

However, he did make a virtual appearance at a press conference in Venice last year - via a live feed to a laptop – to talk about his 5½-hour cut of Nymphomanic.

Last night, von Trier made an exception to his no-show rule to present an honorary award to publicist Christel Hammer. The two worked together on films including Melancholia, Dogville and The Idiots.

His presence meant he could take the stage to accept three of eight prizes. Picking up best director, von Trier revealed: “[Nymphomanic] was the film that took me the longest time to write – one-and-a-half years.

“The reason could be that I had to do so without certain preparations (read: alcohol) during that period. I wouldn’t recommend this to anyone.”

Collecting the award for best original screenplay, von Trier joked: “The advantage of the Bodil prize (the Danish Critics’ Award) is that you can shoot the ‘ping pong bat’ [a mirror] out of Bodil’s hands with an airgun. It is more difficult with the Robert – but I will certainly try.”

Von Trier’s next project will be an ensemble TV series entitled The House That Jack Built, shot in English and due to air in 2016. It marks his first foray into long-form TV drama and is being developed for Danish public broadcaster DR.

Nymphomanic’s haul left little for the other nominees.

Mikkel Nørgaard’s The Absent One (Fasandræberne) and Niels Arden Oplev’s Speed Walking (Kapgang), both considered in 13 categories, received two and no awards respectively.

Danish pubcaster DR dominated the TV awards, where first season of The Legacy (Arvingerne) not only was named Best Long TV series, but also bagged all four acting prizes.

Fares Fares - The Absent One

Me and Dad - No Expectations of Applause
Made in Copenhagen, Producers: Mathilde Hvid Lippmann & Mille Haynes, Dir.: Kathrine Ravn Kruse