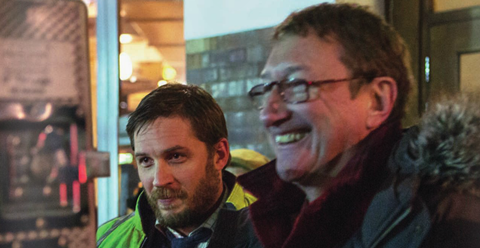 Locke, writer-director Steven Knight’s latest drama, tells the story of Ivan Locke (played by Tom Hardy), a dedicated family man and successful construction manager faced with a career and life-changing dilemma that threatens his carefully cultivated existence. The catch: the story follows Locke, and only Locke, on his one-man journey.

“I’d just finished making a more conventional film [Hummingbird], which was great but it made me wonder if there was a different way of doing a basic task [making a movie],” Knight says. “It gave me the thought you could shoot a journey with just one person in it, and have that journey engage an audience.”

Locke seems like a normal, everyday man at the beginning of the film. As his journey progresses so do his issues, revealing Knight’s plans of telling an ordinary man’s story.

“It’s about a man who makes a decision in 20 seconds and the whole film is the consequences of that decision in the way men deal with emotions,” says Knight, who as a director wants to “attempt to open up new ways to shoot film”.

The film had its premiere at Venice 2013 and Knight won the 2013 British Independent Film Award for best screenplay, while Locke’s editor, Justine Wright, won the European Film Award 2013 for best editor. The film could be a strong contender at this season’s Baftas, and continues to pick up steam, as Tom Hardy was the surprise winner of the LA Film Critics Association’s best actor prize on December 7.

Critics and audiences have also warmed to the film. “People had forgotten they hadn’t seen the other cast members. People create a picture for themselves, and they enjoy that. That’s what cinema can do,” Knight says.

The film was shot in a very “particular way”, says Knight, who filmed the entire movie in one take, 16 different times over six nights with Hardy, plus two nights of pick-ups.

Like Hummingbird, Locke - with a production budget of less than $2m - was backed by production company Shoebox Films, headed by Paul Webster, and sales outfit IM Global.

“This was an inkling in Steve Knight’s brain in November 2012, and we were shooting the movie by February 26,” says veteran producer Webster. “It’s the fastest turn-around I’ve ever been involved in.

“It was pretty full-on, but Tom was so prepared and Steve is the calmest director you could imagine,” Webster adds.

The other actors - Olivia Colman, Ruth Wilson, Andrew Scott, Ben Daniels and Tom Holland - talk to Locke on the phone while he is driving. They called in live from a hotel room on the night shoots while Hardy was driving. “For the actors it’s great, because they get to experience the whole film so that when they’re emotional at the end, they’re emotional because they’ve been a part of it,” says Knight, who was well known as the screenwriter of Dirty Pretty Things and Eastern Promises before he tried his hand at directing with Hummingbird (also known as Redemption) in 2012.

He is still much in demand as a screenwriter, having recently written The Hundred-Foot Journey, Pawn Sacrifice, episodes of TV’s Peaky Blinders, and John Wells’ untitled chef project starring Bradley Cooper. He is currently working on the script for the World War Z sequel.