UPDATED JULY 27: Marvel Studios’ latest slice of superhero action held on to its top bunk over the weekend to beat Sony’s new arrival Pixels in a photo finish. 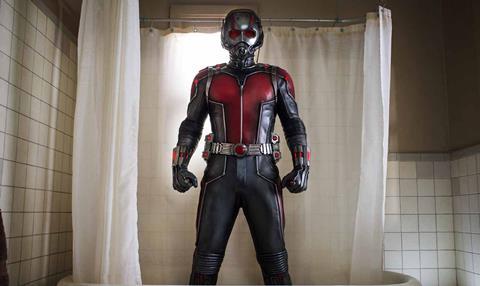 Universal and Illumination’s animation hit Minions slid one place to number three in its third sessions and stands at $262.5m while stablemate Trainwreck at number four has amassed $61.5m after two.

Southpaw arrived in fifth place on $16.7m from 2,772 via The Weinstein Company, which is preparing an awards campaign for Jake Gyllenhaal as a troubled boxer fighting to keep his daughter after the death of his wife.

The 2014 film had an altogether heftier cast and starred household name Shailene Woodley, while Paper Towns has the relatively unproven Nat Wolff – who appeared in The Fault In Our Stars – and Cara Delevigne.

In its second weekend Mr. Holmes climbed two places to number nine after expanding by 325 into 686 sites and added $2.9m for $6.5m via Roadside Attractions.

Box office for the top 12 fell 24.6% against the previous weekend and dropped by a tiny fraction against the comparable session in 2014.