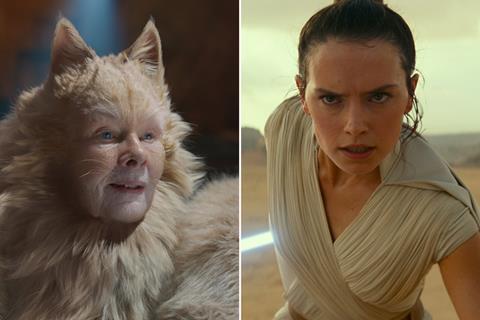 J.J. Abrams’ final instalment in the third trilogy of the space opera franchise ranks 12th on the all-time opening weekend pantheon, and delivered the third highest debut of 2019 behind Avengers: Endgame and The Lion King, as well as the third highest December launch.

Meanwhile Cats, Working Title and Universal’s all-star musical adaptation directed by Tom Hooper, flopped in fourth place amid generally scathing reviews, grossing $6.6m from 3,380 sites. According to reports Universal sent a new version of the film with slight tweaks to theatres on Sunday at the behest of the filmmakers.

Bombshell, distributed in North America via Lionsgate, expanded wide in its second weekend from four to 1,480 and added $5.1m for $5.5m after climbing 13 slots to number six. Executives believe the highly regarded #MeToo drama will benefit from word of mouth as it heads into the holidays.