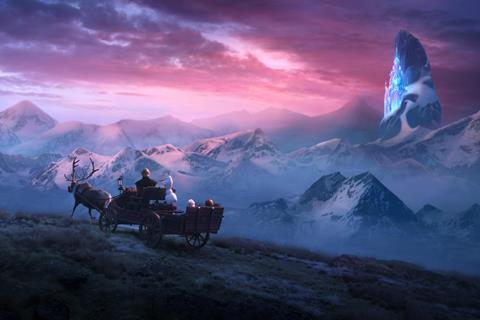 Jumanji: The Next Level lands in its first 18 markets this weekend and will offer the only true Hollywood competition to Frozen 2 as the Disney hit prepares to surge past $900m worldwide and $500m internationally in its third weekend.

As of Thursday the animation stood at $487.4m internationally and $787.6m globally. It is the latest commercial behemoth to drive Disney towards an unprecedented $10bn at the worldwide box office in a single year and the studio will cross that milestone very soon.

Frozen 2 looks likely to rip up the record books yet again when it debuts in South Africa, Uruguay and Paraguay this weekend. Meanwhile Fox’s Ford v Ferrari on $66.7m is on the starting grid in South Korea, Thailand, Chile and Panama.

Jumanji: The Next Level starring Dwayne Johnson, Kevin Hart, Karen Gillan, Jack Black and Awkwafina opens via Sony Pictures Releasing International in 18 markets led by China, France, Brazil and Singapore. The 2017 Jumanji: Welcome To The Jungle opened in China on $39.2m and went on to gross $77.9m, so hopes are high.

Charlie’s Angels has grossed a lacklustre $35.8m and opens in Spain this weekend, followed by France on December 25, its final major market of 2019 before debuts in Mexico on January 1 and Germany on January 2 in the New Year. Zombieland: Double Tap stands at $45.9m.

MRC-Lionsgate’s Knives Out left its mark at the box office in a $71m global launch last weekend and should meet little resistance crossing the $100m threshold in its second session. Comfortably past the $30m international barrier, the all-star whodunnit from Rian Johnson debuts this weekend in Mexico, Italy, South Korea and Denmark. All four markets are expected to deliver strong debuts given the global familiarity of a cast that includes Daniel Craig, Chris Evans, Toni Collette and Jamie Lee Curtis, and local audiences’ appetite for mystery and adventure.

Joker stands at $720.1m through Warner Bros Motion Pictures International and $1.051.1bn worldwide, while It: Chapter Two has amassed $259m, and Doctor Sleep $37.3m. Arguably the most active film from the stable this weekend will be mystery The Good Liar starring Ian McKellen and Helen Mirren, which ventures into Australia, Italy, Spain, and South Korea. Edward Norton’s crime noir Motherless Brooklyn has reached $2.6m and opens in the UK, France, Russia, and Brazil.

Universal Pictures International unleashes the rom-com Last Christmas, which has taken $41.4m, in more than 20 markets led by Mexico, Russia, Japan, South Korea, Indonesia and Taiwan. Emilia Clarke and Henry Golding star. The Addams Family stands at more than $85m through all distributors and opens in Australia and France.