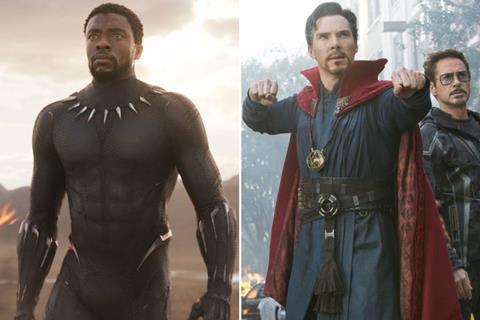 The fickle box office cycle that has triggered many a jeremiad from the US trade press has come up trumps as North American ticket sales crossed $6bn in record time on June 26.

Thanks in large part to superhero tentpoles, as of Wednesday box office was tracking 8% ahead of the same stage in 2017, driven by a gaggle of outliers whose success may be hard to replicate next year.

A pair of Marvel Studios releases led the way via Buena Vista, with Black Panther on $699.8m followed by Avengers: Infinity War on $670.4m. One has to go back several years to find the last time two films crossed $600m in a single year, let alone within the first six months.

Returning to the current year, Fox’s Deadpool 2 ranks fourth on $305.6m. That means three superhero releases have combined for $1.66bn thus far, accounting for roughly 28% of all films released in the first half of 2018.

Pixar’s Incredibles 2 ranks third on $373.9m through Buena Vista and stands as the animation powerhouse’s third highest release unadjusted for inflation. Rounding out the top five is Lucasfilm’s Solo: A Star Wars Story via Buena Vista on $203.9m, followed by the breakout hit of the year so far, Paramount’s A Quiet Place on $186.9m.

Universal’s Jurassic World: Fallen Kingdom opened last weekend and already ranks seventh on $181.1m. By the end of this weekend is will have become the sixth release to soar past $200m and will have overtaken Solo to rank fifth.

Films from the Disney stable account for four of the top five releases in the year-to-date, the other entry coming from Fox. On Wednesday it emerged that the US Department of Justice had cleared Disney to acquire the entertainment assets of 21st Century Fox.

“In 2018 the combination of strong holdover films from 2017 (Star Wars: The Last Jedi, Jumanji, The Greatest Showman) brought much momentum into 2018 where a combination of family fare, horror films, comedies and in particular superheroes created much enthusiasm on the part of moviegoers looking for great entertainment on the big screen,” said ComScore analyst Paul Dergarabedian.

“It’s all about the content and Black Panther, Avengers: Infinity War, Deadpool 2 and most recently Incredibles 2 led the charge in the first six months of the year, aided by surprise hits like A Quiet Place and even Ocean’s 8, which have given Hollywood a big advantage heading into the second half of the summer and the rest of the year.”

The second half of the summer brings Sicario: Day Of The Soldado and The Equalizer 2 through Columbia Pictures, another superhero release from Marvel Studios in the form of Ant-Man And The Wasp over July Fourth weekend, Universal’s Mamma Mia: Here We Go Again!, The First Purge and Dwayne Johnson tentpole Skyscraper, Paramount’s Mission: Impossible – Fallout, The Meg and Crazy Rich Asians through Warner Bros, and The Happytime Murders via STX.

The all-time annual box office record of $11.38bn (unadjusted for inflation) was achieved in 2016. 2018’s year-end tentpoles include Universal’s Dr. Seuss’ The Grinch, Mortal Engines, Halloween, DC Entertainment’s Aquaman, A Star Is Born, Fantastic Beasts: The Crimes Of Grindelwald, and Mowgli through Warner Bros, and Columbia Pictures’ Venom, The Girl In The Spider’s Web, and Goosebumps 2: Haunted Halloween.