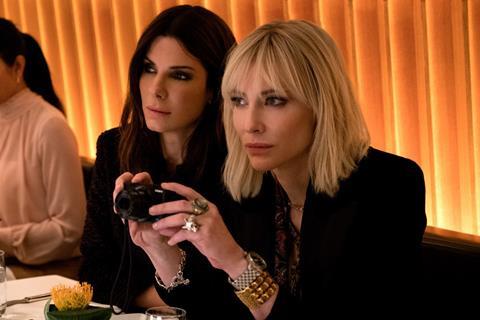 Sunny weather and the World Cup football tournament made for a slow weekend at the UK box office.

Ocean’s 8 was the only major new studio release, topping the weekly chart thanks to four days of previews - it opened on Monday June 18.

Sandra Bullock and Cate Blanchett lead the cast of this heist caper. Steven Soderbergh’s Ocean’s Eleven is the highest grossing entry in the franchise so far, making £5.1m on its opening weekend in the UK in 2002,  grossing £26.5m in total.

Jurassic World: Fallen Kingdom topped the weekend chart with £3.2m, a drop of 55%. J.A. Bayona’s family sequel is now up to £31.2m after three weeks but it is a long way off its predecessor’s £74.7m final total.

Well-reviewed Sundance horror Hereditary dropped to third place, making £834k from 535 screens on its second weekend, a drop of 47%. The Toni Collette-starrer is now up to £3.6m.

Animation Sherlock Gnomes now has a total gross of £8.3m after adding £178,000 this weekend. The romantic comedy Book Club, starring Diane Keaton, grossed £161,000 to take it to a gross of £3.6m after four weeks on release.

After its impressive debut last week, Bollywood thriller Race 3 dropped a sizeable 85% to gross £112,000 over the three-day weekend. Nonetheless this still pushed it past the million mark for a non-final cume of £1m.

The event cinema release of Puccini opera Madama Butterfly from the 2018 Glyndebourne Festival earned £92,000 from 108 locations for a screen average of £860.

Comedy remake Overboard, which sees Eugenio Derbez and Anna Faris reverse the Kurt Russel/Goldie Hawn roles from the 1987 version, opened to £19,000 from 21 sites.