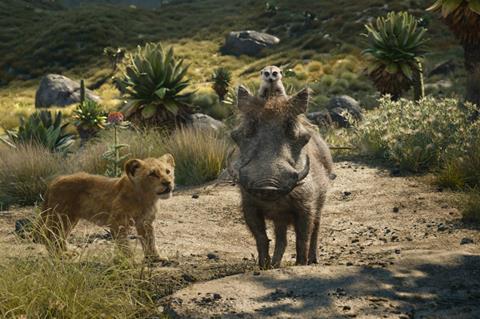 The Lion King has already reached $72.6m in China after six days and according to insiders could go as high as $420m worldwide by Sunday. The North American debut is being spoken of as a possible all-time July opening weekend record-breaker, which means it would need to do better than the $169.2m set by Harry Potter And The Deathly Hallows: Part 2  in 2011.

The family tentpole opened in 19 markets on Wednesday, scoring the second highest opening day of the year-to-date behind Disney’s Avengers: Endgame in France, Germany, Netherlands, Australia, and New Zealand.

France is a highlight so far and generated $4.8m on opening day for what executives called The Walt Disney Studios’ highest live-action debut behind Endgame, although the film is not live-ation, but photo-real animation. Opening day was more than double those of Beauty And The Beast and The Jungle Book in France, Germany, and Korea.

The Lion King debuts in a further 22 territories on Thursday including Russia and Brazil, followed by the UK, Spain and Mexico on Friday. By Sunday it will be open in all international markets with the exception of Japan, Italy and Hong Kong.

Warner Bros Pictures International brass reported latest tallies for Annabelle Comes Home on $121.5m, Godzilla: King Of The Monsters on $275.1m, Pokémon Detective Pikachu on $286.8m, and The Sun Is Also A Star on $1.6m.