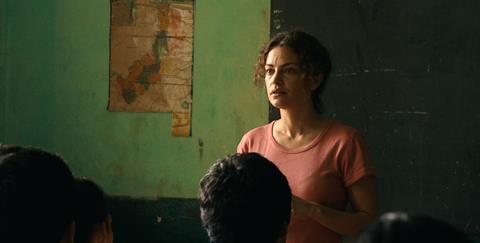 The film stars Dolorès Fonzi as a promising young lawyer who ditches a hot shot career in Buenos Aires to teach in an impoverished town on the border with Brazil and Paraguay. Brutally attacked by a group of youths shortly after her arrival, she has to decide whether to continue with her mission.

Mitre won the €10,000 prize, which has previously been awarded to Guillermo del Toro, Gaspar Noe and Alejandro Gonzalez Inarritu among others.

Acevado’s directorial debut centres on an old man who returns to his home in the middle of a sugar plantation to see his son who is gravely ill. He discovers his son’s illness is related to pollution caused by the exploitation of the sugar cane and decides to do something about it.

The film stars Jérémie Renier as a French army captain on a mission along the Afghan border with Pakistan, whose men start mysteriously disappearing in the middle of the night.

Finally, Ramona from Romanian filmmaker Andrei Crețulescu won the Canal+ Award for Short Film, which sees the broadcaster buy rights for the winning film to screen it on TV.

In total, 1,000 features and 1,750 shorts were submitted for consideration.