Comment: Academy must reclaim its authority after Will Smith fiasco 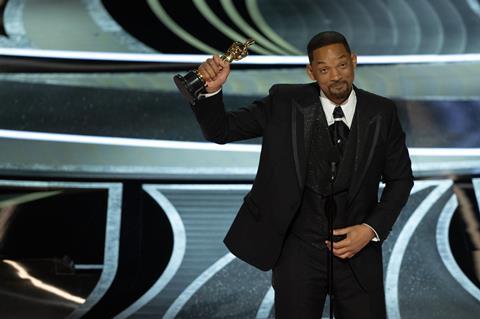 Will Smith wasn’t the only one to lose control at the 94th Academy Awards. His hosts the Academy did too, failing to take command of an ugly altercation towards the end of Oscar night when the whole sorry situation was crying out for order.

And that is the Academy leadership’s problem as of today. They lost control of the narrative not once but twice. Firstly they failed to assert themselves in the immediate aftermath of Smith’s act of violent and boorish behaviour towards Chris Rock when he slapped the comedian for a joke about his wife’s shaved head and then returned to his seat to bellow at him.

Secondly, in the chaotic week that followed the show the Academy announced its governors would vote on April 18 on what disciplinary measures to impose on Smith, which could include expulsion or suspension. On Friday Smith resigned, snatching back the narrative in a smart move for him but one that left the Academy hanging out to dry.

Academy leadership needs to reclaim its authority and get in front of the news rather than merely reacting to developments – or not reacting, as the case may be. An emergency meeting before April 18 to declare measures could accomplish this and although lifetime expulsion feels right, it’s hard to see how keeping Smith expelled from the Academy indefinitely or for a number of years will bother him much more than being barred from members’ Screening Room online portal.

Most importantly the organisation needs to restore its authority and ensure that violent and disruptive conduct will never again be tolerated, and reassure the community that it is capable of hosting a convivial show where attendees feel safe.

Where was the security? Smith not only hijacked the Oscars and in so doing robbed Ariana DeBose, Troy Kotsur, Jessica Chastain, the Coda filmmakers and Questlove – upon whom fell the unenviable task of following Smith’s outburst with an acceptance speech for his documentary Summer Of Soul – of their moments of glory. Others too. All their elegant and heartfelt sentiments after so much hard work were denied their proper place in our collective memory.

The Academy has since said Smith was asked to leave Dolby Theatre and refused. That version of events has been disputed, but what is beyond doubt is that Smith remained, mere feet from other front row nominees. After the slap elicited nervous laughter and pantomime ‘Ooooohs’ – people thought it was a joke and show producer Will Packer said he thought it was two veterans “riffing” – the mood congealed into one of shocked, stony silence when the shouting began. Audience members were shocked and unsettled. Some seated close to the stage, sources have told Screen, wanted to leave.

Academy officers stood by mutely while one of their guests of honour ruined their centrepiece event and stuck around to hoist aloft the best lead actor Oscar. Later that night he danced, statuette in hand, at the Vanity Fair party.

Hindsight removes the fog of uncertainty that shrouds critical moments and so in fairness it’s safe to say Academy officials would have been in shock, like the rest of us on the night of March 27, not to mention the global audience of millions watching on TV and streaming. Nonetheless, they should have composed themselves and ejected Smith from the auditorium.

What next for Smith?

Much has been written about the legal consequences of Smith’s actions and it remains to be seen what will happen. Rock initially declined to press charges when he spoke to LAPD on Sunday night in Packer’s office. It is understood that might not rule out criminal proceedings, and reports have mentioned too the possibility of civil action governing workplace assault.

While the Academy might not be able to impose meaningful sanctions on Smith, they should use the opportunity to send a message to other future attendees considering physical violence and threatening behaviour. Greater censure could come from paying audiences and there has been talk that job offers will thin out, at least for now.

Smith faces plenty of soul-searching after he tarnished a carefully constructed image of approachable geniality. The former box-office superstar once known in Hollywood distribution circles as ‘Mr. Fourth Of July’ certainly doesn’t need the money but he is also young enough to have many years of work ahead of him and might have regarded his career-best performance in King Richard as the start of a comeback.

Others think he is unlikely to ever scale such heights again. Who knows. By coincidence one of his upcoming films is Emancipation, Antoine Fuqua’s runaway slave drama that could be an awards contender and is owned by Apple, whose family-friendly Coda is the best Oscar winner.

For the Academy, what matters most now is reclaiming the narrative. It is unlikely to revoke Smith’s Oscar – it didn’t do that to Harvey Weinstein, of all people – and must now think hard how to convey several messages at once in its vote.

Ironically at a time when the relevance of the Oscars continues to be debated in certain quarters, the show’s viewership surged by more than 50% over last year. Admittedly it still remains the second least-watched Oscars in history but that is a big climb and it is up to the Academy to build on that.

Another point worth noting is that a lot of the talk at the Governors Ball after the show centred on the awful audacity of Smith’s actions at the Oscars. People couldn’t believe he did what he did at the Academy Awards of all places. That alone reveals a natural reverence many feel for the pinnacle of Hollywood’s awards season and that is precisely the prestige and status the Academy needs to harness going forwards.

It has failed to act and has been slow to act. Now is its time to stand up and lead the awards community.