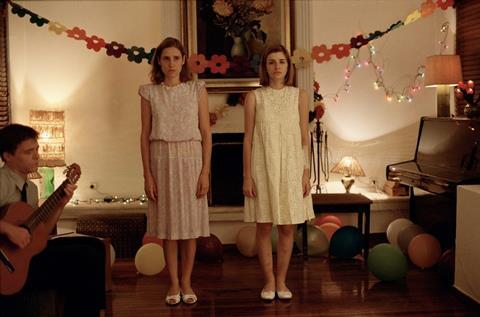 A family living in a secluded property outside town is cut off from the rest of world by a high fence and, with the exception of the father, forbidden to ever leave in Dogtooth, an enforced metaphor which repeats its socio-political messages over and over again.

Winner of the Prix Un Certain Regard at Cannes, it will be branded by some as a highly significant statement and by others as a laborious, long-winded cerebral allegory wrapped in a highly stylised package. Fixed camera shots, meticulous framing and several intentionally passionless but quite explicit sex scenes could carry Yorgos Lanthimos’ second feature through to film festivals and select art house exposure, but its deliberately slow, monotonous pace, and far-fetched premise could make it a tough sale elsewhere.

Winner of the Prix Un Certain Regard at Cannes, it will be branded by some as a highly significant statement and by others as a laborious, long-winded cerebral allegory

The father of this family (Stergioglou) is convinced that the best way for his children to remain uncontaminated by the world is to completely cut them off from it. He has created, in his mansion, a fake, pristine universe for his boy and two girls to grow up in. Now all in their late teens and uniformly docile, they learn everything they know from recorded tapes, but perversely, these are supposed to protect the brood from the dangers of the outside world by changing the sense of any word they are not supposed to know. Thus the sea is a leather chair and a zombie is a yellow flower. Every once in a while, the father brings home a female security guard from his factory, Christine (Kalaitzidou) to service his son, for sex is considered to be another necessary bodily function.

The parents keep their children in this state of induced infantilism on the grounds that what they don’t know can’t harm them. An imaginary sinful brother is created and banished to the other side of the fence, as a warning for the others to behave. However, even in such a hermetically closed, sterile environment, echoes of the world outside are bound to penetrate. When Christine, the only character in the film to have a name, leaves behind a video of Rocky,  thereby “infecting” one daughter, the father ultimately decides that incest is preferable to having strangers trespass into their world.

Borrowing from many sources, the script makes its intentions clear at a very early stage. The dangers of segregating oneself from the world, whether at a personal or national level, are underlined by the immobile camera, the deadpan dialogue, the expressionless acting, the lack of any evident emotion.  At the same time, for a metaphor to make sense, it has to be firmly rooted in the environment it comments on, which isn’t the case here. The wealthy may be distancing themselves from the “vulgar crowds”, but the disciplinary methods of education they use here would make their kids break out in laughter. It’s also difficult not to wonder about the kind of future these parents have in mind for their children, or about simple, practical things, like the condition of the house and the grounds around which look so well groomed despite the absence of any staff.  Details, indeed, but what is a world – imaginary or otherwise - made of, if not details?