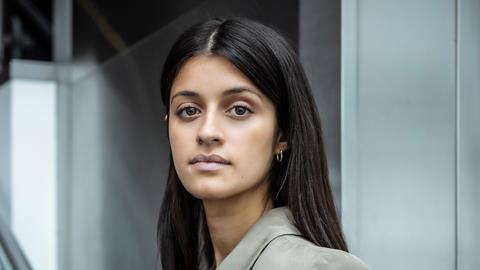 When it came to casting Netflix series The Witcher, the person who needed most convincing that Anya Chalotra was right for the role of sorceress Yennifer was Chalotra herself.

“I went into the audition knowing I was not the girl for them,” recalls the 24-year-old actress. “In the brief they said, ‘Men want her, women want to be her.’ I thought, ‘There’s just no way I’m going to get this part.’”

Chalotra’s feelings changed during the process. “Every time I auditioned, I wanted it more because I knew they believed in an instinct that I had. I was like, ‘Maybe I could turn this a little bit on its head, and maybe this is the person they want.’”

Based on the fantasy novels by Poland’s Andrzej Sapkowski and created by Lauren Schmidt, The Witcher sees Chalotra star opposite Henry Cavill and Freya Allan in a saga that has been dubbed Netflix’s Game Of Thrones. The streamer declared viewership had reached 76 million within its first month of release. Chalotra impresses in a role that sees her character undergo a painful physical transformation from a hunchback with a twisted jaw to an arresting beauty with piercing violet eyes. “She’s quite a sexual being,” notes the actor.

The rise for Wolverhampton-born Chalotra has been meteoric. Graduating from London’s Guildhall School of Music & Drama in 2017, she began work immediately in Much Ado About Nothing at the city’s Globe theatre, and had crammed in four more jobs — supporting parts in TV shows Wanderlust and The ABC Murders, and lead roles in animated series Sherwood and Theatre Royal Stratford East stage play The Village — before flying to Budapest for The Witcher in October 2018. The day after the eight-month shoot ended, she began rehearsals for David Hare’s Peter Gynt at the National Theatre.

Shooting on season two of The Witcher now runs through to early 2021, and Chalotra’s further projects include No Masks, a collaboration between Stratford East and Sky Arts, co-starring Russell Tovey, and multi-platform sci-fi animation New-Gen.

“Hopefully there will be lots [of other opportunities],” she says. “There are six months of the year where I will be able to pursue other projects.”