Films from Japan, Australia, South Africa and Brazil all feature in the Berlinale 2019 line-up. Screen previews all the titles in the section. 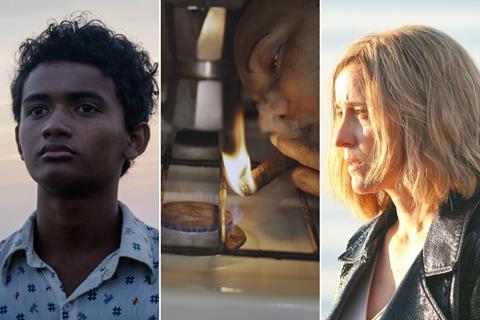 ‘Buoyancy’, ‘On The Starting Line’, ‘The Miracle Of The Sargasso Sea’

Dir. Hikari
Hikari’s debut feature challenges the traditional Japanese attitudes towards disabled people. Instead of focusing on the 23-year-old protagonist’s physical disability as a result of cerebral palsy, the film celebrates her intellectual and artistic abilities and, through becoming an adult comic-book artist, her journey towards independence and sexual awakening. Formerly known as Cantering, the project participated in the 2016 Sundance Institute/NHK Screenwriting Workshop, Film Independent’s 2016 Screenwriting Lab and 2017 Directing Lab.
Contact: Knockonwood Inc info@knockonwood.jp

Dir. Aleksandr Gorchilin
Russian actor Gorchilin, who appeared in Kirill Serebrennikov’s The Student, makes his directing debut at the tender age of 26 with a drama billed as “an ode to youth”. The film depicts the impact on two young men after their friend commits suicide while under the influence of drugs. Joint winner of debut film at Sochi Open Russian Film Festival last June, Acid is produced by Sabina Eremeeva and Natella Krapivina.
Contact: Wide infos@widemanagement.com

Dir. Edward Berger
German filmmaker Berger’s previous film, family drama Jack, played in Competition in 2014. Since then, he has turned his attention to television, directing episodes of Deutschland 83, The Terror and Patrick Melrose (the latter Showtime/Sky Atlantic series seeing him nominated for a 2018 Primetime Emmy). All My Loving follows three siblings all facing life crises, and is produced by Jan Krüger and Jörg Trentmann of Port au Prince Film & Kultur Production, along with Raimond Goebel of Pandora Film Production.
Contact: Beta Cinema beta@betacinema.com

Dir. Uli M Schueppel
This third part of Schueppel’s Chants trilogy on space, time and the body follows his 52-minute TV film The Place (1997) and feature-length Rotterdam premiere The Day (2009). In this essay-style film shot on 16mm, 26 people talk about love and hardship, hope and bitterness, and fear and happiness accompanied by celluloid images of Berlin at night. The Breath is a Schueppel Films and ZDF/ARTE co-production, with backing from Medienboard Berlin-Brandenburg.
Contact: Schueppel Films info@schueppel-films.de

Dir. Santiago Loza
Loza played in Panorama last year with Malambo, The Good Man and returns with a sci-fi about an existential journey undertaken by Tania, a transgender girl, who travels through small-town Argentina with two close friends to find the cute purple alien that cared for her grandmother in her final years. The film was a recipient of a Hubert Bals development fund award in 2015.
Contact: Constanza Sanz Palacios Films info@constanzasanzpalaciosfilms.com

Dir. Rodd Rathjen
After playing in Critics’ Week at Cannes in 2013 with short film Tau Seru, Rathjen now premieres his feature debut in Berlin. Buoyancy, the story of a teenage Cambodian boy who is enslaved on a Thai fishing trawler, is produced by Australia’s Causeway Films and Definition Films along with Cambodia’s Anupheap Productions, and received support from Screen Australia, MIFF Premiere Fund and Film Victoria. Umbrella Entertainment will distribute in Australia and New Zealand.
Contact: Charades sales@charades.eu

Dir. Yaron Shani
Shani (Ajami) makes his Berlin debut with this drama about a respected police officer who finds himself stuck at home with a difficult stepdaughter and distant wife after he is suspended following accusations of misconduct. Chained is the second film in the Love trilogy, in which the director asked his mainly non-professional actors to inhabit the lives of their characters over the course of a year. The first film, Stripped, premiered in Venice’s Horizons section last year. Saar Yogev and Naomi Levari at Black Sheep Film Productions (Fig Tree) lead produced.
Contact: Alpha Violet info@alphaviolet.com

Dir. Federico Bondi
A filmmaker whose documentaries and sole previous scripted feature (Locarno 2008 premiere Mar Nero) have tackled social issues, Florence-born Bondi presents a drama about a young woman with Down Syndrome, who must help look after her father after the death of her mother. Marta Donzelli and Gregorio Paonessa produce for Vivo Film (2018 Competition title Daughter Of Mine) alongside Rai Cinema, with backing from regional cultural funds including Tuscany and Lazio.
Contact: Cristina Cavaliere, Rai Com cristina.cavaliere@rai.it

The Day After I’m Gone (Isr)

Dir. Nimrod Eldar
Menashe Noy plays a single-father veterinarian who is forced to reappraise his life when he discovers his daughter wants to end her life in this debut feature for Israeli filmmaker Eldar. Taking her to visit her mother’s family near the Dead Sea, they embark on a journey of mutual self-discovery and healing. Foxtrot producer Eitan Mansuri at Spiro Films lead-produced. The film won the inaugural $100,000 Sam Spiegel alumni fund for first features award in 2015 and picked up a post-production prize at Sarajevo’s CineLink in 2017.
Contact: Hedi Zardi, Luxbox hedi@luxboxfilms.com

Dir. Gabriel Mascaro
Set in 2027, in a Brazil that is governed by conservative and religious forces, this sci-fi follows the steps of a woman (Dira Paes) who belongs to an extreme evangelical cult. While her own marriage is in trouble, she takes advantage of her position in a notary’s office to pursue her mission of preventing couples from getting a divorce. Mascaro won a special mention at Locarno for August Wings (2014) and presented Neon Bull (2015) at the Venice and Toronto film festivals.
Contact: Memento Films International sales@memento-films.com

A Dog Barking At The Moon (China-Sp)

Dir. Xiang Zi
The Chinese filmmaker’s directing debut revolves around two generations. In a Chinese society that places great onus on men and women to be part of a family, a wife discovers that her husband is in a relationship with another man. She decides her only refuge is to be found in the doctrines of a cult. The cast includes rising actress Nanji and veteran actress Na Renhua (1986’s Married To A Child).
Contact: Granadian sales@granadian.com

Dir. Michela Occhipinti
Nine years after her 2010 feature documentary Letters From The Desert (Eulogy To Slowness) played across the festival circuit, winning a special mention at Cameraimage, Italian writer/director Occhipinti brings her first fiction feature to Berlin. The story of a North African woman who, according to Mauritanian tradition, must put on weight to appeal to her husband-to-be is produced by Rome-based Vivo Films, which also has Dafne in Panorama this year.
Contact: Films Boutique contact@filmsboutique.com

Dir. Armando Praca
Praca’s directing debut depicts a gay 70-year-old male nurse and diehard Greta Garbo fan (Marco Nanini) who tries to find a hospital bed for his best friend, transvestite Daniela (Denise Weiberg), and also takes home a young man who committed a crime and needs a place to hide and recover. Nanini is a veteran theatre, TV and film actor, best known on screen for Carlota Joaquina: Brazilian Princess (1995), which kick-started the so-called ‘Retomada’, the renaissance of Brazilian cinema in the mid-1990s. Prior to Greta, Praca has screen credits as an assistant director and in writing and casting.
Contact: M-appeal berlinoffice@m-appeal.com

Dir. Bas Devos
Devos won the grand prize of the Generation 14plus international jury in Berlin five years ago with his debut feature Violet. Now the Flemish filmmaker lands in Panorama with his follow-up, a story about modern Brussels seen through the eyes of a doctor (Willy Thomas) who visits his patients in their homes — including an Italian interpreter for the European Parliament (Alba Rohrwacher) who is using drugs as a cure for her lethargy and loneliness. Marc Goyens and Tomas Leyers produce for Brussels-based Minds Meet.
Contact: Alice Lesort, Les Films Du Losange a.lesort@filmsdulosange.fr

Light Of My Life (US)

Dir. Casey Affleck
Word among the production community is strong on Oscar-winning actor Affleck’s feature directing debut, in which he stars as a man determined to protect his daughter at all costs 10 years after a world-changing pandemic. Elisabeth Moss also stars in what will be one of the hottest US acquisition targets in Berlin. Black Bear Pictures financed and CAA handles US sales.
Contact: Negeen Yazdi, Endeavour Content nyazdi@endeavorcontent.com

The Miracle Of The Sargasso Sea (Gr-Ger-Neth-Swe)

Dir. Syllas Tzoumerkas
Having premiered in Venice and Locarno with his two previous fiction features Homeland (2010) and A Blast (2014), Thessaloniki-born Tzoumerkas arrives in Berlin with this crime tale focusing on two women in an eel-farming town in the west of Greece. Angeliki Papoulia (Dogtooth, The Lobster) stars as a policewoman forced to relocate from Athens some 10 years earlier; Youla Boudali (Homeland) is the mysterious sister of a nightclub lounge singer. Maria Drandaki (A Blast) produces in a co-production with Unafilm, PRPL, Kakadua Filmproduktion and Film i Vast.
Contact: Jan Naszewski, New Europe Film Sales jan@neweuropefilmsales.com

Dir. Alejandro Landes
Fresh from its bow in Sundance World Cinema Dramatic Competition, Monos is the third film from Colombian-Ecuadorian filmmaker Landes, following his 2007 documentary Cocalero and 2011 scripted comedy drama Porfirio. Monos, which follows eight child soldiers as they oversee a US hostage at a Colombian mountaintop base, benefits from a score by Academy Award-nominated Mica Levi (Jackie).
Contact: Le Pacte contact@le-pacte.com

Dir. Xaver Böhm
The feature debut of Böhm (aka Xaver Xylophon) whose animated short Roadtrip played in Competition at SXSW in 2015, O Beautiful Night revolves around a young man with an all-consuming fear of dying who meets a dark figure claiming to be Death incarnate. Written by Böhm and regular collaborator Ariana Berndl, the film is produced by Komplizen Film, which is also behind Emin Alper’s 2019 Berlin Competition title A Tale Of Three Sisters.
Contact: The Match Factory info@thematchfactory.de

Dir. Joanna Hogg
Hogg makes her Berlin bow with this Sundance premiere executive-produced by Martin Scorsese. Set in the 1980s and based on the filmmaker’s own experiences, the film stars Honor Swinton Byrne (I Am Love) as a quiet film student who finds her artistic identity while also becoming involved with a complicated man (Thomas Burke).
Contact: Protagonist Pictures info@protagonistpictures.com

Dir. Miroslav Terzic
Director Terzic (Redemption Street) explores the real-life scandal of newborn babies being stolen from Serbian hospitals with this tale of a mother determined to uncover the truth about the infant son she was told had died 20 years before. Writer Elma Tataragic has also co-written Competition entry God Exists, Her Name Is Petrunija with that film’s director Teona Strugar Mitevska. Stitches is produced by Serbia’s West End Production with Slovenia’s Nora Production, and is supported by Film Centre Serbia, the Slovenian Film Centre and Eurimages.
Contact: West End Production artisanpa@yahoo.com

Dir. Jayro Bustamante
Guatemalan filmmaker Bustamante broke out at the 2015 Berlinale when Ixcanul won the Silver Bear, and follows that up with a story about an evangelical Christian and father of two who falls in love with a man. Fearing the consequences on their family, his wife resolves to find a ‘cure’. Bustamante’s La Casa de Produccion produces with Memento Films (which distributes in France), Luxembourg’s Iris Prods, France’s Tu Vas Voir and Arte France Cinéma.
Contact: Film Factory Entertainment info@ﬁlmfactory.es