Fantasy romance, manga adaptations and the latest in a hit horror franchise are among the titles being showcased by Japanese sellers at the Marché. 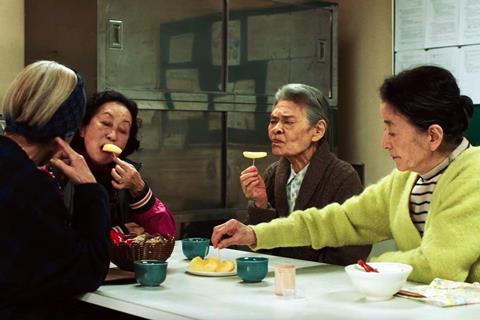 Japan enters Cannes on the back of victory at the Oscars in March, where Ryusuke Hamaguchi’s Drive My Car won best international feature film, having begun its ascent at last year’s festival, where it played in Competition and won three prizes including best screenplay.

The country is represented at this year’s festival by Chie Hayakawa’s Un Certain Regard title Plan 75. On the market side, Japanese sales companies are showcasing titles that range from fantasy romance to the latest instalment of a hit horror franchise.

It all points to a thriving filmmaking business that looks set to grow further as Japan reopens its doors to international productions after two years of Covid border closures. Case numbers have been stabilising in Japan and restrictions were fully lifted across the country in late March.

Dir. Chie Hayakawa
The feature directing debut of Hayakawa is set in a Japan of the near future, in which a government programme encourages senior citizens to be voluntarily euthanised to remedy a super-aged society. Starring veteran actress Chieko Baisho, the Un Certain Regard feature expands on Haya­kawa’s segment in the five-part anthology film Ten Years Japan. It is a Japan-France-­Philippines co-­production and the credits of Tokyo-based production company Loaded Films include Kiyoshi Kurosawa’s To The Ends Of The Earth, which played as the closing film at Locarno in 2019. Haya­kawa’s short film Niagara was selected for Cannes’ Ciné­fondation in 2014.
Contact: Irene Cadavid, Urban Sales

Dir. Yanakaya
This animation is set in a fictitious 1980s Japan where a narcotic named golden monkey is running rampant through Japanese society and a soldier is recruited to investigate the mysterious substance. It marks the feature directing debut of Yanakaya, who animated the film himself using a distinctive computer-graphic style that harks back to video games of the 1990s. It received its world premiere at Japan’s Skip City International D-Cinema Festival 2021 as the first animation to ever play in its main Competition, and later screened at International Film Festival Rotterdam 2022.
Contact: Mami Furukawa, Nikkatsu

Dir. Satoshi Miki
This fantasy drama follows a screenwriter on a losing streak who stumbles into a store where he can find anything his heart desires. Starring Ryo Narita and Atsuko Maeda, it marks the latest feature from director Miki, whose credits include 2013 sci-fi comedy It’s Me, It’s Me and comedic monster movie What To Do With The Dead Kaiju?, which received a Japan release in February. It is also the screenwriting debut of former Screen journalist Mark Schilling. The film will world premiere at Fantastia International Film Festival and a Japan release is scheduled for August 5, 2022.
Contact: Momoko Nakamura, Free Stone

Dir. Tatsushi Omori
This action drama is led by Hidetoshi Nishijima, the star of Drive My Car. He plays a former yakuza and one of a five-person crew who rob a love hotel, only for the gangsters who own the establishment to come seeking revenge. Director Omori is known for The Ravine Of Goodbye, which won the jury prize at Moscow International Film Festival in 2013, and The Whispering Of The Gods, which played at Locarno in 2006. Goodbye Cruel World’s original screenplay was written by Ryo Takada, whose credits include Mukoku and Over The Fence. A release is planned for the autumn.
Contact: Rie Hatano, Happinet Phantom Studios

Dir. Kazuyoshi Kumakiri
The first feature from director Kumakiri in five years is a suspense thriller that centres on a promising young man who falls to the bottom of a deep manhole on the eve of his wedding day. Desperate to escape, the man uses his smartphone in an attempt to reach police, his friends and social media as time begins to run out. Production is underway but the cast has yet to be revealed. Kumakiri’s previous features include Sketches Of Kaitan City and My Man, which won festival prizes in 2010 and 2014 respectively. The screenplay comes from Michitaka Okada, who wrote hit features Masquerade Hotel and Masquerade Night.
Contact: Keiko Yoshida, Gaga Corp

Dir. Jumpei Matsumoto
Based on a true story, the film portrays the journey of a blind boy and his mother, who devotes her life to giving him hope, even when he begins to also lose his hearing. It is based on the formative years of Satoshi Fukushima, who became the world’s first deafblind university professor. The mother is played by Koyuki, who starred opposite Tom Cruise in The Last Samurai, while the son is played by Taketo Tanaka, who was previously seen in Naomi Kawase’s True Mothers. The cast also includes Lily Franky, who starred in 2018 Palme d’Or winner Shoplifters and in Matsumoto’s 2017 drama Perfect Revolution.
Contact: Keiko Yoshida, Gaga Corp

Dir. Kei Ishikawa
An attorney investigates the deceased husband of a former client when it is discovered the dead man is not who he claimed. Ishikawa’s feature directing debut Gukoroku — Traces Of Sin played at Venice in 2016, and A Man reunites him with Satoshi Tsumabuki. The cast also includes Sakura Ando. Written by Kosuke Mukai, a release is lined up for autumn.
Contact (Asia) Shochiku; (outside Asia) The Match Factory

Dir. Yuki Tanada
Based on an award-winning graphic novel by Waka Hirako, the story follows a woman who learns that her best friend Mariko died by suicide. After snatching the urn from Mariko’s abusive father, she makes a journey to a place her friend always wanted to visit. Starring Mei Nagano, of action feature Hell’s Garden, the film is scheduled for release in September. Tanada’s debut feature Moru won the grand prize at the 2001 Pia Film Festival and her credits also include Romance Doll (2020) and The Cowards Who Looked To The Sky (2012).
Contact: Chiyo Mori, Kadokawa

Dir. Ayuko Tsukahara
This fantasy romance is an adap­tation of a series of novels and manga that have sold more than 4 million copies to date. It follows a young woman from a troubled home who is expected to marry a heartless soldier. After a rocky introduction, the two begin to connect. The leads are played by Mio Imada and Ren Meguro, a member of boy band Snow Man. Written by Tomoe Kanno, the feature is in post-production with a release planned in 2023. Director Tsukahara is mainly known for TV series but also directed 2018 fantasy feature Café Funiculi Funicula.
Contact: Chiyo Mori, Kadokawa

Dir. Yudai Yamaguchi
An action film star is drawn into the real world of violence when yakuza mobsters infiltrate the set of his latest feature. The lead role is taken by Tak Sakaguchi, who rose to stardom in Ryuhei Kitamura’s 2000 thriller Versus. It marks the latest collaboration between Sakaguchi and the director, which dates back to Versus which Yamaguchi co-wrote, and his 2003 directing debut Battlefield Baseball. Takayuki Ota produced, and a release is being lined up for 2023.
Contact: Daichi Yashiki, Toei

Dir. Hisashi Kimura
The latest instalment of the Ring franchise sees the cursed video spread on social media. A smart graduate student, played by Fuka Koshiba, attempts to solve the mystery and save her younger sister. The cast also includes Kazuma Kawamura, a member of J-pop group The Rampage. Written by Yuya Takahashi, the film is directed by Kimura, whose credits include 2019 mystery drama Murder At Shijinso. It is set for release in October.
Contact: Chiyo Mori, Kadokawa

Dir. Hideo Nakata
Horror filmmaker Nakata, director of the Ring and Dark Water films, returns with a chiller set in a forest that is renowned for supernatural phenomena. The story, written by Brazili Ann Yamada and Tetsuya Oishi, is based on witness accounts of people who simply claim to have seen “it”. The cast includes Masaki Aiba, an actor, presenter and member of J-pop boy band Arashi. The film is set for release in Japan on September 30.
Contact: Shochiku

Whisper Of The Heart

Dir. Yuichiro Hirakawa
Aoi Hiiragi’s manga, famously adapted by animation house Studio Ghibli in 1995, has been given the live-action treatment. It follows a studious girl who befriends a musical classmate, with each promising to make their dreams come true. Hirakawa, director of 2020 family adventure The Promised Neverland, retells the coming-of-age story but also follows up with the characters 10 years later. Starring Nana Seino and Tori Matsuzaka, the film is set for release in Japan on October 14.
Contact: Shochiku

Dir. Yuji Nakae
Based on an essay by renowned Japanese author Tsutomu Mizukami, this rural drama centres on a writer who lives alone in a remote mountain villa, cooking meals from homegrown vegetables while penning manuscripts and experiencing the changing of the seasons. The lead role of Tsutomu is played by Kenji Sawada and is the first starring role for the veteran actor and singer in 16 years. It also marks the return of director Nakae, whose debut Nabbie’s Love played at the Berlinale in 2000 and whose most recent film was an adaptation of A Midsummer Night’s Dream in 2009. Acclaimed chef Yoshiharu Doi consulted on the seasonal meals depicted in the film.
Contact: Mami Furukawa, Nikkatsu