Charlie Hunnam: Robert Pattinson didn't speak to me during 'The Lost City Of Z'

“I didn’t know if he was just ‘in that zone’ or if he genuinely didn’t like me.” 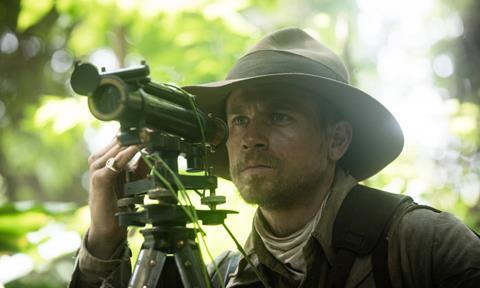 Charlie Hunnam has come a long way since Channel 4 series Queer as Folk, one of his first roles.

The Newcastle-born actor rocketed to international fame after landing the lead in FX’s Sons Of Anarchy, the network’s highest-rated series to date, and has since become a star on the big screen despite dropping out of Fifty Shades Of Grey - something he “still feels bad about”.

Hunnam has two major films out in the next few months; James Gray’s biopic of British explorer Percy Fawcett The Lost City Of Z, and Guy Ritchie’s big budget King Arthur: Legend Of The Sword, set for release in May.

We sat down with the actor during the Berlin Film Festival, when The Lost City Of Z screened out of competition, to discuss how he was given the silent treatment by Robert Pattinson, his extreme weight loss for the film, and Guy Ritchie’s unorthodox shooting style.

Screen: When you first read James Gray’s screenplay for The Lost City Of Z, what were your thoughts?

Charlie Hunnam: My initial reaction to reading James’s script was one of total joy and terror. It was, bar none, the best script I’ve ever read. It felt to me like the biggest challenge I had been given so far so I wanted to immediately jump in and give it everything I had.

You had just finishing shooting Guy Ritchie’s King Arthur: Legend of the Sword before The Lost City Of Z.  Can you talk about that transition?

King Arthur was incredibly demanding: I was in almost every scene and shooting long hours. By the time we finished shooting, I only had ten days before I started shooting this. I was filled with panic. I used every second of that time to try and transform myself psychologically and physically because I was muscle bound and in action hero mode.

I went through this very rapid process of losing weight [approximately 60lbs in nine weeks]. I wanted to fill myself up with [Percy] Fawcett, I had been slowly and quietly researching. One of the things he admired most as a human characteristic was authenticity, and so it was important for me to put a level of myself into playing him, as much as honouring who I thought he was. I fell in love with Fawcett and felt a responsibility to do him justice.

What was it like working with Sienna Miller, Robert Pattinson and [Bafta Rising Star winner] Tom Holland?

I had a couple of rehearsal sessions with Sienna, but I didn’t spend any time with Tom or Robert. I wanted these relationships to evolve naturally on screen. Through the work, I don’t think I said more than ten words to Robert [Pattinson] off camera. I didn’t know if he was just ‘in that zone’ or if he genuinely didn’t like me. There was a real distance between us. But it creates the right dynamic on screen. He’s reached out to me subsequently, making overtures for us to be friends now, so I think it was about the work.

How was working with James Gray, a director who is more known for his success in the independent sector [We Own The Night, Two Lovers] rather than larger scale action films?

James is my kind of director. There was no actual rehearsal in terms of reading scenes, but there were a lot of one-on-one conversations [mainly with James] discussing characters, themes and story. His understanding of narrative and the filmmaking process is so absolute. I felt freed to take risks. Some filmmakers start to make too many choices and the essence of your performance can be lost. But with James, I just knew he got it.

In terms of the size of a movie - that never matters because it is about the human journey in the middle of it.  And if you have a good crew around you, the size of a movie just means there will be a few more extras and a few more crew members. James is very insular with his approach to the crew. He is behind the monitor, only speaking with the first AD, the DoP and his actors. So, the film felt intimate. Day to day, I didn’t talk to anyone but James.

What were the challenges in shooting in the Amazon (Santa Marta, Columbia acting as the Bolivian Rain Forest)?

[Percy] Fawcett had this distinct indestructibility - he would go on these explorations where half the men would die, or get gangrene, or were missing limbs, and he seemed like he didn’t get as much as a mosquito bite. So there was this sense that I had to stand up straight in any condition. And I found the more difficult the shooting became, the more engaged I felt in the process.

In addition to a large beetle getting stuck in my ear, the most dramatic experience we had was when we had to evacuate because of the thunder and lightning. The first time the river was rising rapidly, and we couldn’t sail down the river, so instead we had to hike through the jungle in the middle of the night to get to base.

The other time we were very far up the river when a bolt of lightning hit a tree, and knocked me off my feet. I was in the middle of this impassioned plea for us to stay telling James, “This is precisely what we fucking came here for! Roll the camera!”. Then another bolt of lightning came down and James said, “Can we leave now?”

I wanted to be away from everybody, in a scaled back version of living as much as possible. They found this tiny hotel for me that was basically like little huts in the jungle where I could be by myself. I was so engaged in this process of no emails, no phone - I didn’t speak to the rest of the outside world during the duration of the shooting. When we started shooting the explorations, the others wanted to stay in my hotel, but I couldn’t break the [silent] spell. I just avoided them in the lunch room.

You’ve worked with several strong-minded directors, including Sons of Anarchy showrunner Kurt Sutter and most recently Guy Richie. How is the working experience different to working with someone like James Gray?

Every director has their own process. With Kurt, he became like my big brother. We found this process to marry our styles, and we became deep collaborators.

The thing about Guy is that he has the greatest ability on set of any director I have ever seen. Equal to his ability on set is his inability to synthesise what is going to happen before he gets on set. So when you get to work on any given day, you have no idea what you are going to shoot.

Often he would come on set, and we would read through our lines and he would say, “No, no, no. This is fucking shit!” I am very homework intensive: I prepare at great length what is in the script. So it required for me to become very fluid in my process and to be able to think on my feet.

What upcoming projects are you working on?  Will you be involved in the Sons of Anarchy spin-off Mayans MC?

No, I won’t be involved in the spin-off. Right now, I am furiously developing a bunch of stuff.  I have four movies in different stages of development that are set up at studios.  A couple I have hired writers for, and a couple I am writing myself. That’s the next phase, there is no television at the moment.  But I’m very excited about these movies.

The Lost City of Z opens in the UK March 24, Germany on March 30, US and additional territories from April 21.