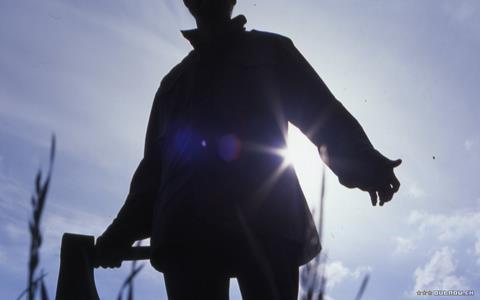 Dead Man’s Shoesis billed as a return tobasics for Shane Meadows after the relative disappointment of his last feature,Once Upon A Time In The Midlands. Semi-improvised, thisis a project striving after the raw edge and dynamism which characterisedMeadows’ shorts (for instance, Where’s The Money, Ronnie’)

His ability to mix humour,violence and lyricism remains unimpaired, but Dead Man’s Shoes is afrustrating mish-mash of different genre elements (horror film, revengewestern, social realist drama) which is ultimately let down by its ownposturing and machismo.

Meadows is a paradox: apopulist filmmaker cherished by critics and festival programmers but whose workis yet to find a wide audience. 24:7, his debut feature and stillarguably his most accomplished film, sold widely in the internationalmarketplace, but then under performed at the box-office both in Britain andabroad.

His two subsequentfeatures, A Room For Romeo Brass and Once Upon A Time, likewisegarnered reasonable reviews without making much money. There is little evidencethat Meadows’ latest effort will buck the trend.

Though it will show up onthe festival circuit - it plays both Venice and Toronto among others after itspremiere at Edinburgh - international distributors may well keep their distanceunless the film shows some legs in the British market (where it is beingreleased by Optimum in October). Whether it will do so is a moot point. Thedownbeat box office fate of Bille Eltringham’s This Is Not A Love Song,another intense, low-budget British drama that won plaudits onthe festival circuit, suggests that this may be a tricky sell at home as wellas abroad.

As ever with Meadows, theaction is set in the Midlands. The story begins in striking fashion (Meadowshas always had an eye for a shot) with two silhouetted figures seen on thehorizon. One is Richard (Considine), a bearded, enigmatic army veteran, theother his sweet-natured but simple-minded brother Anthony (Toby Kebell) to whomhe is devoted.

As in John Sturges’celebrated modern-day western, Bad Day At Black Rock, they are coming toa town where the locals are harbouring a very guilty secret. In the years thatRichard was away with the army, Anthony was taunted, humiliated and physicallyabused by Sonny (played by ex-professional boxer, Gary Stretch), the local drugdealer, and his motley crew of thugs. Now Richard wants revenge.

Once Richard gets down tobusiness, the playfulness rapidly disappears. We learn in gruelling flashbacksjust how badly Anthony was abused. It also becomes apparent that Richard is anangel of death, determined to kill his brother’s tormentors in as sadistic away as possible. All of a sudden, as the bloodletting begins in earnest, thefilm lurches off into Grand Guignol, Texas Chainsaw-style territory.

At times, the film seemslike a boys’ own wish fulfilment fantasy. (With the exception of ShirleyHenderson in Once Upon A Time In The Midlands, Meadows’ films featurefew strong female characters.) There are far fewer of the lyrical interludeswhich are found in the director’s earlier films - for instance, the beautiful,slow-motion sequence of Bob Hoskins’ boxing trainer dancing a waltz with hiselderly aunt in 24:7. The quietest moments here - notably the scenesbetween Richard and his brother hiding away in the countryside, reminiscingabout old times - are the most affecting, but they’re in short supply.

The attitude towardcharacter is often confusing. Small-time hustlers like Herbie (StuartWolfenden), Soz (Neil Bell) and Tuff (Paul Sadot), who initially seemed comicand sympathetic, are transformed into one-dimensional villains waiting theirturn to be bumped off. Richard torments them, feeds them drugs and prolongs theirdeaths. His behaviour toward them is so violent and excessive - and theirtreatment of Anthony so repellent - that we’re left with a narrative in whichall the protagonists seem equally loathsome.

Though Dead Man’s Shoespurports to explore “the underbelly of contemporary rural Britain,”Meadows isn’t really interested in exploring the reality of life in aprovincial town. He portrays a world in which half-a-dozen people in asmall-knit community can be killed without the neighbours raising the alarm orthe police intervening.

Considine brings menace andquiet intensity to the role of Richard, playing him as a Midlands version ofClint Eastwood’s high plains drifter. A final reel twist provides a belatedexplanation as to why he behaves with such viciousness, but by then, he islikely to have forfeited the sympathies of most spectators.

Individual sequences arepowerful, comic and touching by turns - they just don’t hang together with anycoherence. The filmmakers shot Dead Man’s Shoes at breakneckpace, using real locations, adding dialogue and re-writing the screenplay asthey went along. Maybe such an approach was liberating but it surely alsoexplains why the film so often feels inchoate and unstructured.

For several years now,Meadows has been touted as “the great Brit hope.” Here, though, aswith Once Upon A Time In The Midlands, there is a dispiriting sense thathe is still marking time.