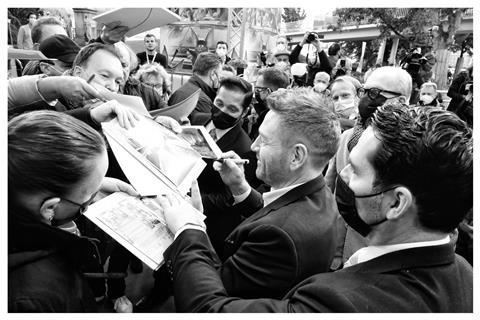 Kenneth Branagh at the Filmfest Hamburg

Kenneth Branagh confessed to his criminal past while attending the Filmfest Hamburg this week. His autobiographical drama Belfast has been one of the most warmly received films in the festival and Branagh acknowledged one of the key scenes in the movie was indeed based on an actual incident.

In 1969, as a nine-year old boy growing up in Belfast in the early days of “the troubles”, he really did take part in a Protestant riot. It culminated in a Catholic-owned supermarket being looted. And, yes, he stole a box of washing powder which his furious mother later made him return.

“Yes, indeed, that happened,” Branagh admitted. He describes the incident as “a tipping point” in his mother’s understanding of how combustible Belfast was then becoming. She began to understand “the speed of change” and how “a normal group of people” could turn into a rampaging mob “when the tinder was dry, as it was in August 1969. People could easily and swiftly lose control.”

Branagh wrote Belfast last year during the first lockdown and shot it later that year in Belfast and London under strict Covid-safe conditions. It premiered at Telluride and then won the auspicious audience award at Toronto a few days later. Universal has international rights.

One of the highlights of making the film for Branagh was his collaboration with the film’s composer, the legendary and mercurial Northern Irish musician Van Morrison.

“He has said in the past that the great fallacy about him is that he is grumpy. I did not find him grumpy,” said Branagh of Morrison. “We met a few times and he read the screenplay and was very interesting about it. He seems to recognise much in it.”

Branagh said Morrison has an uncanny “feel” for the city of Belfast that is fully reflected in the musical score he wrote for the movie, with saxophone and electric piano to the fore. “It has a very moody, jazzy quality that is behind the haunting music of memory that he seems to provide. And he wrote a new song for the film which is the film that opens the film, called ‘Down To Joy’. I found him an artist to his fingertips. You had to say little to him before already he was running with an idea of his own.”

Morrison isn’t the only Northern Irish musician to feature in Belfast. The film also has a song from Ruby Murray, described by Branagh as “our Doris Day” and as the woman who “subsequently gave her name to the slang for [curry]”.

These days, Branagh lives in Berkshire, in the heart of the English home counties, a long way from the terraced houses and seething streets of his childhood in Belfast, where doors were always open and everyone knew everyone else. The director acknowledges he pinches himself at how far he has come since he left Northern Ireland.

“I sometimes look at the film now. When I see a kid sitting on a pavement outside a betting shop with a Thor comic, which is where I came across that character, in those kind of comics, and you realise that 40 years later, you ended up making a film in Hollywood about that same character. It’s quite a journey, quite a long way to have gone.”