‘I don’t give a damn about these nationalistic questions.’ Cannes chief on why regional representation is not his problem… and other matters. 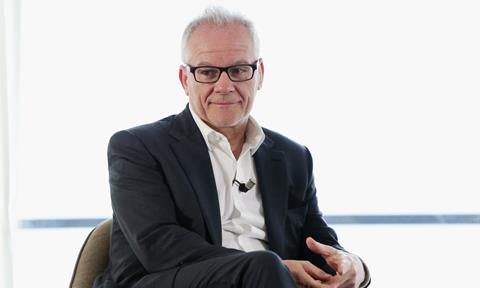 Cannes Film Festival delegate general Thierry Frémaux talks about pulling together a 70th anniversary edition, reflecting the past, present and future of cinema and why he gets so irritated when journalists ask questions about the selection or non-selection of their national cinema.

You said in the press conference that you tied up today’s Official Selection announcement at 3am in the morning.  Was it more complicated than usual?
No, not at all. We always finish in the early hours of the morning. There’s nothing new.

We at Screen were convinced Redoubtable was going to be the opening film. Was that your original plan?
There was absolutely no reason to think that. You have to stop doing that, the press reads the press.

Why did you choose Ismael’s Ghosts as the opening film?
It fits the 70th anniversary perfectly. Arnaud Desplechin is an auteur who has often played in Competition. It will make for a magnificent red carpet and will also come out in cinema theatres in France at the same time. We decided it would be good to open Cannes with a work by an important filmmaker like Arnaud.

You said in the press conference that more Official Selection titles would be announced in the coming days and weeks? How many more films do you think you will add?
I don’t know. You know I always like to make small additions and this year is no different.

You have invited two Netflix-backed titles for the first time this year (Okja and The Meyerowitz Stories). You’re a champion of the big screen experience, whereas Netflix rarely supports theatrical releases. Did you come under pressure to work with the company this year?
I chose Bong Joon-Ho’s film because he’s a very good filmmaker. I hardly spoke to Netflix. And The Meyerowitz Stories ﻿came to us through the producer Scott Rudin.

In your recent book Sélection Officielle you talk about being interested in another Netflix title, David Michôd’s War Machine, for the 2016 edition of the festival. Did you consider it again for 2017?
We didn’t see it.

The studios are conspicuous by their absence this year? Why do you think this is?
When they have films ready we show them but this year nothing was ready at the right time for a Cannes premiere. Alien Covenant comes out two weeks before Cannes and Dunkirk was not ready. It’s a coincidence.

And Luc Besson’s Valerian And The City Of A Thousand Planets? Did you talk to Besson?
It’s the same situation. It’s not ready.

We were surprised to see the inclusion of two TV series – Jane Campion’s Top Of The Lake and David Lynch’s Twin Peaks – given you have always said Cannes is for cinema. Why this change of heart?
As I said in the press conference, it’s a way of checking in with two important filmmakers – both Palme d’Or winners as well as former presidents of the jury – who happen to have now made TV series.

So there are no plans to incorporate high-end series into the Official Selection from now on?
No. Not at all. Not at all.

Do you watch TV series?
Yes, but as an amateur, not professionally. Cannes is a festival of cinema. TV series can also be cinematic but they’re also something else. Even at technical level a film festival is not the same as a festival dedicated to TV series. Cannes is about cinema.

This year’s Selection is political in tone, with films touching on hot topics like immigration, the refugee crisis, the environment, animal cruelty and chemical warfare. Was this a deliberate aim on the part of the festival?
When the Selection has a political edge, it’s not that the festival is trying to be political; it’s the artists who are being political. Immigration wasn’t really a subject 10 years ago, but today it is. Filmmakers often make films situated in the world in which they live, and that is one of today’s realities.

Do you feel more under pressure as you prepare the 70th edition, in terms of the breadth of the programme and the need to reflect the past, present and future of cinema?
No not really. The inclusion of Inarritu’s virtual reality work was an attempt to look at the future. Where this new technology will take us I can’t say, but what’s important about this work is that it’s the work of an artist. The festival’s past will be explored in Cannes Classics, for which we’ll do a separate announcement. The idea is to focus on films which have a special place in the history of Cannes, going right back to the early years.

Why do you get so irritated when journalists ask you about the absence of their national cinema in the Selection in the press conference? They’re just doing their job.
It’s silly to say I am from such and such a country and why isn’t the cinema of my country represented. I’ve received emails from the whole world saying it was grotesque. I’m talking about universality and they are talking about ‘my country, my country’. If they ask that question it’s because their newspaper owners ask them to do so. I find this ridiculous. We’re there to talk about cinema, not national flags.

At the risk of irritating you, how many Chinese films were submitted?
I don’t know, I don’t know. I don’t want to reply to this question. I don’t give a damn about these nationalistic questions. I don’t know how many French, English, Italian or Chinese titles we received. We’re not an institute of statistics that has to give answers to those kinds of questions, which have nothing to do with what we’re trying to do in Cannes.

In your book Selection Officielle you talk about the fact Jérôme Seydoux asked you at the end of 2016 to succeed him as president of Pathé but after much consideration you turned him down to stay at the festival and the Institut Lumière in Lyon. Could you still take up the offer in the future?
I am staying with the festival. What will happen in the future, I can’t say. No-one knows the future. But for now, I am focusing on the 70th edition.

Is there anything you would like to add, that I’ve not touched on?
Only what I said earlier in the press conference, that we want to a hold a festival which is human, joyful and generous. We want the festival to be a celebration of cinema; reflecting on it is something necessary in our lives, on how Cannes is also necessary for cinema.