Perspectives on 2020: Sidonie Dumas on guiding Gaumont through France’s lockdowns

As part of Screen’s Perspectives on 2020 series, Gaumont CEO Sidonie Dumas explains how she juggled production and release schedules at the French powerhouse in the face of two national lockdowns. 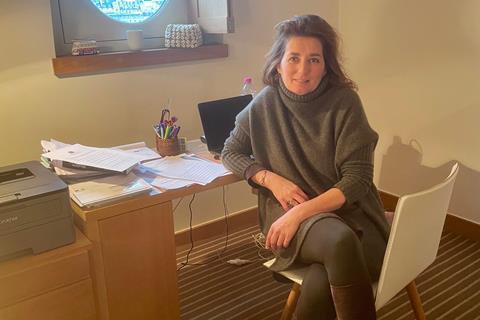 Sidonie Dumas is CEO of France’s oldest film company Gaumont. Under her leadership, it quit the exhibition sector in 2017 to focus on film and TV production as well as theatrical distribution at home. The company was still in the midst of this transition when the pandemic struck. It delivered a double blow as film and TV shoots shut down and cinemas closed for 14 weeks in the first lockdown, and then from October 30 until at least January 7, 2021, amid a second wave of the coronavirus.

Dumas, who describes herself as “a natural optimist”, remains positive in the face of these challenges, and forecasts her company’s finances will have recovered fully by the end of 2021.

Films now lined up for release in the first half of next year include Denis Imbert’s Vicky And Her Mystery, Valérie Lemercier’s Aline, The Voice Of Love and Nicolas Bedos’s From Africa With Love, the latest film in the 0SS 117 spoof spy franchise starring Jean Dujardin. For TV, its new show Lupin starring Omar Sy launches on Netflix in January, and the company has recently renewed with the platform for a third series of Narcos: Mexico and a fifth season of the animated show F Is For Family.

What’s your most memorable moment of 2020?
Having to twice re-date films due to the two lockdowns. We had to be extremely creative and inventive to figure out new dates that could work. We didn’t have a lot of films scheduled for release over the summer when we first went into lockdown in March, but then ended up releasing Tout Simplement Noir in July.

With the second lockdown, we had just released Albert Dupontel’s Bye Bye Morons. It drew a remarkable 700,000 admissions [equivalent to a gross of $5.7m] in eight days and then the cinemas closed. It will be the first film that we’ll put back in theatres when they reopen on December 15. [plans for cinemas to reopen on December 15 were shelved and theatres will remain closed until at least January 7]. All our other films have been put back to 2021.

It’s been a cross between a balancing game and dominoes. It’s complicated because it’s not just about our films but all the other films, and we have no idea when the Americans will come back. Each time, we’ve had to reinvent and remobilise.

Tout Simplement Noir is a first-time feature by French comedian Jean-Pascal Zadi and John Wax. Why do you think it has been such a success?
We knew it had box-office potential, but what also drew us to the project was how it used comedy to explore the complex subject of what it means to be black in France, as well as the issue of racism within the black community itself. It was a perfect film for when the cinemas reopened in June because it was a comedy but, beyond that, its subject matter suddenly became very timely and political, because of everything that happened in the US while we were in lockdown [around the death of George Floyd and the Black Lives Matter protests]. But this wasn’t something we foresaw when we set the dates.

What impact has the pandemic had on Gaumont overall? The company posted losses in 2019 but its finances look set to recover in 2020. Can you talk us through this?
We left the exhibition business in 2017 to focus on quality TV and film production, because it’s what we do best. We always knew there would be a transition period that risked being a bit difficult and this has gone for longer than forecast. If we hadn’t gone through the pandemic, we would have achieved positive figures much more rapidly. This period of productions shutting down and cinemas closing and opening and closing again has been very complicated for us. But I’m confident that by the end of 2021 we’ll be back on track. Today, we’re based in the US, the UK, Germany and France, and I believe we’re in the process of building something that is solid and long-term.

How have you adapted your working style to stay productive and sane during 2020?
I couldn’t be in this business without being an optimist; it’s always been complicated, even when there isn’t a pandemic. We were already in a process of renewal, under which we were embracing new partners and new technologies, even if we still believe very much in theatres. I’ve tried to seize the moment, to remobilise and adapt to the situation. Looking for solutions is an aspect of this business that I’ve always loved. It’s an opportunity for renewal. It’s not very relaxing I grant you, but it’s exciting. For example, trying to get productions up and running after the first lockdown and figuring out what to do about insurance, that was fascinating.

What is one thing that changed during 2020 that you would like to see continue in 2021?
A creative business like cinema is best conducted in person. Having time to reflect, chat and ‘lose time’ together is really important I really miss human contact. I can see the benefits of working virtually. Before I was jumping in the car every morning, getting stuck in traffic jams, and then working late at the office. In the future, I can envisage working from home a few mornings a week, even if I never want to return to the period when I was on video conferences all day, five days out of seven every week.

What’s the one thing you’re pinning your hopes on for 2021?
I hope we’ll all be able to meet up again and move on from the subject of the pandemic. We need a bit of lightness. When you’re constantly being bombarded with figures about the numbers of cases and deaths, it’s extremely anxiety provoking. We need a bit of lightness and tenderness. I hope we’ll come out of it with a different way of living; spending more time with our loved ones, dreaming and enjoying the cultural life we have missed all these months.

Audience habits have changed in 2020. Do you think this will have a long-term impact?
Once people are allowed to go out freely again, they won’t choose to sit at home in front of a small screen. Old habits will return. What was interesting for us during the lockdowns were that many of the TV channels were relying heavily on feature films to fill programming slots, and we ended up doing a lot of unexpected catalogue sales. The appetite for cinema is still there.

How can the entire industry support more inclusion behind and in front of the camera in 2021?
I’m militant about first films. There’s always something exciting to discover in new arrivals, in a new generation. I don’t care whether a filmmaker is a woman or man, what their religion is, or what colour they are, from the moment there is a real story to with a tell with potential for the cinema or a platform, everyone is welcome.

What excites you about the future of the film industry?
The strength of the cinema theatre. Nothing compares to the experience of watching a film collectively on the big screen.