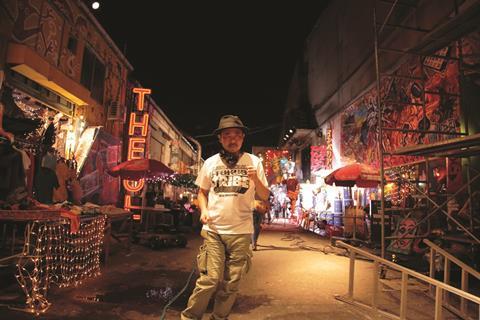 Over the past 60 years, Nikkatsu’s legendary studio facility in the western Tokyo city of Chofu has hosted countless productions in its stages, from classics such as Kon Ichikawa’s The Burmese Harp and Shohei Imamura’s The Insect Woman to recent films like Zatoichi and Yatterman. But Sion Sono’s gang action film Tokyo Tribe may mark the first time the exteriors of its ageing buildings and interconnecting service roads have been converted into a giant film set.

It is an eye-popping mix of rock ’n’ roll neon, graffiti tags and murals, street-market bustle, and a melange of Japanese and foreign signage. The effect is that of an alternate-future Tokyo as cultural melting pot. It serves as the backdrop for Tokyo Tribe’s hip-hop gang-war tale, based on the second series of Santa Inoue’s titular cult manga.

“This is not your average Japanese movie. This is rap plus fighting action!” announces lead producer Yoshinori Chiba, who reunites with Sono after the one-two punch of 2010’s queasy serial-killer outing Cold Fish and 2011’s sexual thriller Guilty Of Romance. Tokyo Tribe marks the largest budget to date for both the genre film producer and Sono.

Sono sits at the video monitors smoking furiously as a shot is set up. He compliments production designer Yuji Hayashida (13 Assassins, Goemon), mentioning another set built outside Tokyo’s city limits for the climactic battle.

The 51-year-old director’s confidence is running high after the overseas success of his gonzo love letter to film-making, Why Don’t You Play In Hell?. The film world premiered at Venice this year, picked up the Midnight Madness audience award in Toronto and secured North American distribution through Drafthouse Films. Nikkatsu began sales of Tokyo Tribe at AFM. Shooting wrapped in late September and the film is now in the final stages of post. France’s Wild Side and Hong Kong’s Sundream have picked up rights.

Shoot from the hip

Back in September, with the sun now set, the shot is ready. A rain machine starts up and the two sizeable gangs march towards each other, chanting their affiliation. After a tense exchange of insults, they launch into a massive rumble. The raw RED Epic footage, shot by cinematographer Daisuke Soma (Helter Skelter), is impressive even on the playback monitor.

Between takes Sono rattles off an eclectic list of cinematic influences on Tokyo Tribe: The Warriors, Asian martial-arts movies, Streets Of Fire, the surreal work of Shuji Terayama, Julien Temple’s Sex Pistols documentaries, and Scarface’s final gun battle for good measure. But Sono seems most pleased about ripping off the Cadillac with hood-top chandeliers from his beloved Escape From New York. “And I had the cast watch West Side Story before shooting. This is a rap musical,” he says.

Only Ryohei Suzuki, who plays Mera, leader of the Wu-Ronz gang, has somewhat of a name from roles in HK: Forbidden Super Hero and a string of TV series. In the role of Kai, from rival gang Musashino Saru, is Hokkaido-based rap artist Young Dais. He won the part after sending in an audition recording via the film’s open casting campaign on YouTube — typical of Sono’s rebellious approach to film-making.

Nearby, a stunt team of young men and women flip, kick and dive on each other in preparation for hand-to-hand combat. One of them looks like a 13-year-old boy, but is actually a 16-year-old girl with incredible dexterity.

Chiba explains the approach to casting: “The street-level rap performers and music give the movie its power. We hope to boost the whole scene.”

Sono adds: “Having real stunt performers in acting roles means we see them doing all their own fighting, without cutting away.”

By shooting the Nikkatsu production on its backlot and avoiding star salaries, Tokyo Tribe’s spend will all be seen on screen. Nikkatsu is steadily building buzz for the film before its planned summer 2014 release.