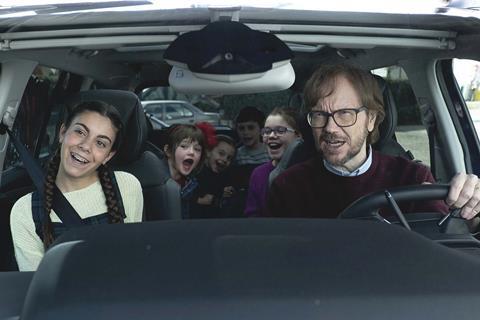 ‘Father There Is Only One’

The December holiday period is one of the busiest times of the year at the Spanish box office and the industry is hoping the last month of the year builds on the momentum generated to date. Total box-office receipts rose by 9% to $619m (€558m) to December 1, 2019, compared to the same period in 2018. However, local productions have struggled to hit the €100m ($110.9m) mark.

Fiesta del Cine, running October 28-30, scored the second best result in its 10-year history. Held twice a year in the spring and the autumn, the Fiesta offers audiences the chance to buy reduced-price tickets — just €3 ($3.22) — at participating cinemas. The promotion registered a 70% increase in traffic compared to the one held in October last year, with more than 2.3 million admissions.

The fact it was scheduled for the end of the month rather than the start meant colder weather boosted the numbers, as did the diversity of titles. These included US films Joker, Maleficent: Mistress Of Evil and The Addams Family as well as Spanish-language titles While At War and Twin Murders: The Silence Of The White City. Bong Joon Ho’s Palme d’Or winner Parasite was also part of the promotion.

Warner Bros’ Joker was the only US title to challenge the reign of Disney in Spain, elbowing its way into the top three films of the year. Quentin Tarantino’s Once Upon A Time… In Hollywood performed well and was the filmmakers’s second best take in the territory after Pulp Fiction in 1994, with a gross of $13.5m.

The most popular local productions were comedies Father There Is Only One (Padre No Hay Mas Que Un) and I Leave It When I Want. New films from Pedro Almodovar and Alejandro Amenabar made it to the top 25. Almodovar’s Pain & Glory grossed $6.4m to make it one of the director’s best-performing films at the Spanish box office (Volver is the highest, grossing $12.8m in 2006).

Amenabar’s While At War, a drama set at the start of the Spanish Civil War, was a surprise autumn hit, grossing $11.5m for Disney.

Despite these select success stories, Spanish films are not expected to hit the €100m ($111m) benchmark the industry sets for itself each year. It has done so in each of the last five years, but Spanish productions have grossed just $96.6m (€81.7m) to date in 2019, 7% less than the first 11 months of 2018. No big local films are due for release in December. 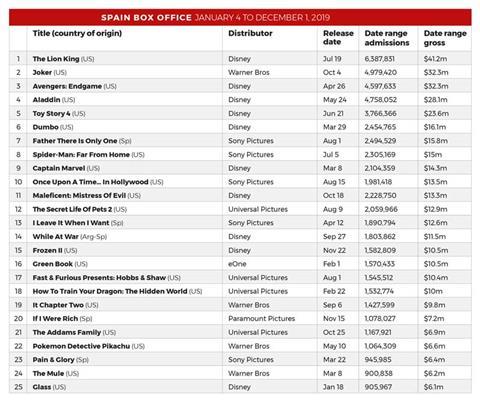