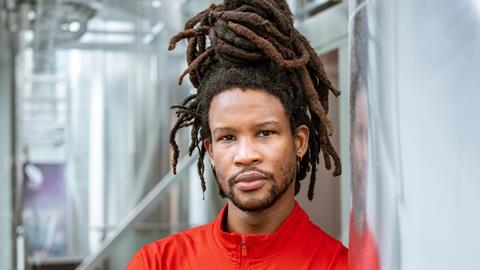 Born in London to Nigerian parents, Akinola Davies Jr spent his childhood years in both Nigeria and England — formative experiences that have shaped his work.

At university, he collaborated on a “terrible” short film, but “fell in love with the process and the collaborative aspect”.

Attending a three-month filmmaking workshop at New York Film Academy in 2009 “gave me confidence, because I realised my ideas weren’t necessarily conventional”. Davies soaked up knowledge while assisting filmmakers and photographers Tim & Barry over a five-year period. “They’re synonymous with documenting black music, grime and garage in London,” says Davies.

He began making his own shorts and music videos for friends, but a key creative spur was a return to Nigeria after a long absence. “I felt an overwhelming urge to document stories on the continent and within the diaspora,” he says. “There’s an urgency of those stories needing to be centre place.”

His work in Nigeria includes short Zazzau, a document of a colourful equine festival, and a piece titled Unity Is Strength for fashion label Kenzo. “They were just kind of gobsmacked with what we did,” he says with a laugh.

Davies remained disconnected from the UK film establishment until an email introduction by composer Mica Levi to BBC Films prompted a direct response from Rose Garnett. “I Googled her name, and I was like, ‘Holy shit, she’s the head commissioner,’” he says. Meetings followed and BBC Films’ message was clear: “‘Whenever you’re ready to make a feature, we will help.’”

Davies gained a better understanding of the industry after participating in the BFI Network, which champions new filmmakers, in 2018. Premiering at this year’s BFI London Film Festival is his BBC Films-backed short Lizard, produced by Rachel Dargavel at Potboiler and co-written with his brother Wale Davies. Next is sci-fi short X Us, produced by 2019 Star of Tomorrow Fiona Lamptey.

Davies is now refining ideas for his debut feature. “My experience as an image-maker is quite bountiful,” he acknowledges. “I’m trying to figure out how to empower my characters with dialogue that feels natural and rich.”