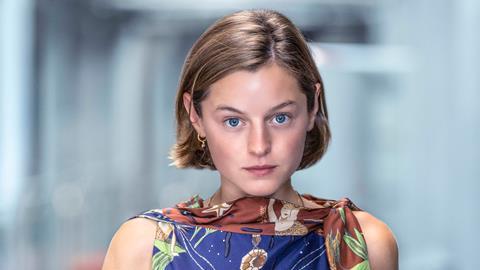 Emma Corrin will soon see her profile surge when she appears as a young Lady Diana Spencer in season four of Net­flix’s The Crown.

Filming was wrapping up just as the Covid-19 lockdown took place in the UK, with producers completing all but a week’s filming. “It was a weird way to end after such an intense experience,” says Corrin, whose stint is over now Elizabeth Debicki takes on the role for the final two seasons.

Unsurprisingly, the most memorable moment for Corrin was when she first donned Diana’s iconic wedding dress. “It was really weird, when I put it on everyone on set went completely silent and remained silent,” she recalls. “I felt the weight of responsibility. There was something that happened to the atmosphere that was really odd.”

Corrin studied education with English and drama at Cambridge, and was involved in the university’s theatre scene. After graduating she was selected for Cambridge’s Marlowe showcase, which sees 14 actors perform for industry professionals, which helped secure her an agent.

Her first paid job, in August 2018, was a small part in ITV’s Grantchester, followed by Warner Bros’ Batman prequel series Pennyworth. Corrin was working in a retail start-up packing underwear when her agent called about the audition. She had only two hours’ notice to find a 1960s-style costume and rush to the studio. “It was a huge production,” says Corrin. “Looking back now, knowing what my next job would be, I’m glad I had it as an experience.”

She also had a small role in Philippa Lowthorpe’s Misbehaviour, released in March this year, which felt “completely different” from her other projects, in part because of its mostly female-driven set. “It was very inspiring and made me think about the kinds of things I want to make,” she says.

The casting process for The Crown took about a year. She was asked by casting director Nina Gold to come in and read as Diana to help with auditions for Prince Charles. “I prepared as if it was a real audition,” says Corrin. Eventually, after a “strange year” having actual auditions and hearing constant “murmurings”, she landed the role. “I spent a long time trying to keep my cool.”