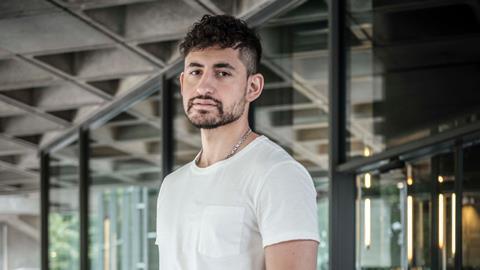 It was a rather unlikely series of events — beginning with a chance meeting between Omar Sharif and Amir El-Masry’s father in Paris — that set the Cairo-born, London-raised actor on his path to an acting career. After connecting with Sharif in Deauville, France, where the Lawrence Of Arabia star’s latest film was showing, El-Masry junior got chatting to the film’s director and writer who asked him to audition for their next project — Ramadan Mabrouk Abul-Alamein Hamouda, which won him, aged 18, the best young actor award at the 2009 Egyptian Cinema Oscar Festival. “It was insane, and I felt like a fraud because I was essentially playing myself,” he says.

Returning to England to study criminology — El-Masry “pulled a sickie” during his first year to star in another Egyptian movie, El-Talatah Yishtaghaloonha (2010) — he eventually graduated, interned at a law film, and then went to Lamda “where my UK career started”. While there, he was cast in Jon Stewart’s feature directing debut Rose­water, and a steady stream of increasingly bigger TV and film parts have followed — among them Woody Harrelson’s groundbreaking Lost In London: Live, Star Wars: The Rise Of Skywalker, and series Tom Clancy’s Jack Ryan, The Night Manager, The One and Industry.

It was his starring role in Ben Sharrock’s refugee drama Limbo, however, that has proved the gamechanger, earning El-Masry a best actor BIFA nomination and putting him, he says, “on the radar” as a leading man.

“I am being considered for bigger projects and cool things which have nothing to do with background or race,” he says.

El-Masry will next be seen in the Steven Knight-penned six-part series SAS: Rogue Heroes about the formation of the SAS, as well as Ritsa, an Egyptian romantic comedy. He has also co-written a pilot for a comedy-drama loosely based on his and his younger brother’s experience of growing up in Ealing, west London, which has been optioned by Sharon Horgan’s Merman. He also hopes to star in the project.

“It’s never been a dream of mine to be a writer, but when you have an idea and feel very strongly about it, why not?”