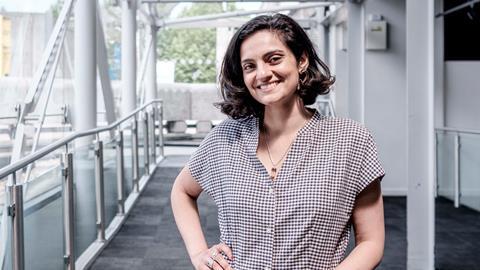 Nida Manzoor was a creative child, and recalls singing along with her siblings to Simon & Garfunkel’s Live In Central Park, trying to emulate the harmonies. Comedy was also important in the Manzoor household, as the family gathered to watch anything from Blackadder and Fawlty Towers to Jim Carrey films.

Born to Pakistani parents, Manzoor, now 31, lived in Singapore before moving to London at 10. After studying politics at University College London, she spent her days as a runner in a post-production house while making her first two shorts, Arcade and 7.2, and then moved into series directing with the BBC’s Enterprice, written by Kayode Ewumi. “I wanted to bring a visual style to his genius writing that allowed me to bring more cinematic qualities to TV and especially shows that look at people of colour,” she reflects.

From there, Manzoor was offered the chance to direct two episodes of Doctor Who. “I love genre, and it was fun to think about aliens and spaceships,” she recalls. “I loved that worldbuilding aspect. It was a great experience to do something of that scale.”

At the same time, she was pitching her own series, We Are Lady Parts, which Channel 4 picked up for a six-part series launching in May 2021, executive produced by Working Title Television and shown on Peacock in the US. Wanting to stay true to her voice and the experiences of her friends and family, which is about five young Muslim women in a punk band, she tried not to feel weighed down by the pressure of representing rarely seen characters in comedy. “I had to unburden myself. I am only one voice,” she says. “If the show opens doors, that’s awesome, but I just wanted to try to write the funniest show I could.”

Her debut feature, now greenlit with Working Title and Focus Features and Olivier Kaempfer at Parkville Pictures, is Polite Society, a feminist action-comedy heist film to shoot later in 2021. “I want to make sure I keep it in my tone,” she says. “I write in a certain style and I want to keep that voice.”