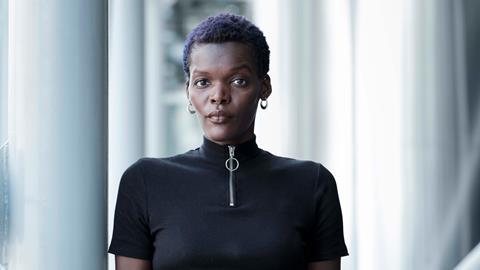 After establishing her reputation as an actress on the London stage, Sheila Atim is increasingly bringing her talent to the screen, most recently in Amazon series The Underground Railroad. “I’ve been taken by surprise throughout my creative life so far, from the opportunities that have come my way to what people have seen in me and the roles I’ve been cast in,” says Atim.

Born in Uganda, she moved to the UK with her mother at five months and grew up in Essex. Despite ambitions to become a singer and writer, Atim studied for a degree in biomedical science — but she was also taking evening and weekend classes, “places that were providing free or very cheap arts training”. Early stage roles included Ché Walker’s The Lightning Child at Shakespeare’s Globe theatre in London, a revival of Lorraine Hansberry’s Les Blancs at the National Theatre in 2016, and Bob Dylan musical Girl From The North Country a year later, for which she won an Olivier award.

Joining the second season of Hulu drama series Harlots in 2018 “was the job that created the bridge between theatre and screen for me”, notes Atim. The following year “was a real year of learning” as she landed roles in Halle Berry-directed boxing drama Bruised, Amazon miniseries The Pale Horse and HBO’s unaired Game Of Thrones prequel pilot.

It is her role as the mysterious Mabel in Barry Jenkins’ slavery drama The Underground Railroad, however, that has proven her most high-profile to date. “That experience has set an incredibly high bar,” she says of the filming.

Atim will next be seen in Disney’s live-action Pinocchio feature directed by Robert Zemeckis, and has spent the past 18 months exploring scriptwriting. “I’ve been figuring out what it is that I have to say,” she says. “The common theme that is coming out is stories around belonging, perhaps told using magical realism.”

Atim’s ambition extends further. “Eventually, I would love to be able to direct,” she confirms. “The writing that I’m experimenting with, I don’t necessarily see myself in it; I’m not writing these things as a vehicle for myself. I want to learn about each craft as a standalone thing.”