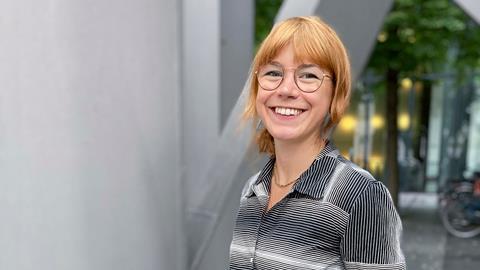 Sophie Littman is more obsessed with mood than with genre. “Genre is never in the forefront of my mind,” she says. “I’m interested in the unsettling, eerie and uncanny feeling that comes when you destabilise the familiar. I’m chasing that feeling.”

Littman started out making video installations while studying at the Slade School of Fine Art in London. Sudden Light, selected for Cannes Film Festival’s short-film competition in 2020, was her first scripted short, about two sisters walking their dog in a field who see a man lurking nearby. “I wanted it to be a metaphor about grief and also a sensory experience,” she says. “Not everything has to be fully comprehended to have this visceral experience.”

Being selected for Cannes, she adds, “felt validating. A lot of people related to the grief aspect of the film and that felt important to me.”

Littman, who splits her time between Somerset and Berlin, has finished her new 14-minute short Know The Grass, which is playing in competition at the BFI London Film Festival (LFF) in the shorts programme. Supported by the BFI and BBC Film and produced by Lorine Plagnol, it is described by LFF as “a British folk horror” about a 15-year-old girl in a rural town who has eerie premonitions. “It’s taking a step further into a more narrative world but maintaining that dreamlike quality,” she says.

For her first feature, Littman plans to “graduate” to characters in their 20s, and she has two projects in development, a sci-fi thriller feature and a supernatural murder-mystery series. “There is a clear thread through all of my work, which is this unnerving, unsettling feeling and the porosity between dreams and reality,” she says.

Littman namechecks the Winkie’s Diner sequence in David Lynch’s Mulholland Drive. “That’s the kind of work I want to make,” she muses. “You don’t feel like you have a solid grasp on reality but you’re enthralled.”