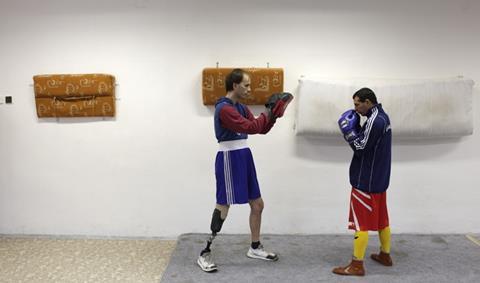 The film, which had its world premiere in the Berlinale’s Panorama section in February, won the ¨New Europe - New Names¨ competition at the festival, which ran from March 19 to April 2.

The film, about a former Olympic boxer who goes on a punishing ‘tour’ to raise some fast cash, also took home the CICAE Art Cinema Award.

The acting trophies went to Janusz Gajos (Body) and Bianca Kronlöf (Underdog) as well as a Special Mention for Signe Baumane’s Rocks In My Pockets.

Producers from the Baltic states, Armenia, Georgia and Ukraine presented 16 feature film and documentary projects at the sixth edition of the festival’s parallel industry programme, the Meeting Point Vilnius (MPV).

Latvian producer Kristians Alhimionoks, one of Screen’s Future Leaders at the 2014 Cannes Film Festival, revealed to ScreenDaily that the UK-based sales agent Kaleidoscope Film Distribution will handle international sales for Latvian director Aigars Grauba’s English-language medieval drama The King’s Ring  which will be shooting from August 2015.

Alhimionoks said that the cast will include UK and American actors and the production will be made in co-production with the Kaunas Film Studio, 100 kilometres west of Vilnius.

Grauba’s past films included 2012’s Dream Team 1935 about the Latvian basketball team’s triumph at the European Championships in 1935 and the 2007 action drama Die letzte Front - Defenders Of Riga, set in 1919 during Latvia’s battle for independence.

Film-makers Michel Hazanavicius and Joshua Oppenheimer spoke about the sources of inspiration for their work during MPV’s three-day programme of presentations, discussions and closed screenings.

Both films had their world premieres at the Max Ophüls Prize Film Festival in Saarbrücken in January, and Pluto’s other new acquisition in February, Gerd Schneider’s Verfehlung, also premiered there.

The film, which was completed by his film director son Alexey German Jr., received the honours for Best Feature Film, Best Director, Best Cinematography and Best Actor as well as the trophies in the categories of sound design, production design, and costume design.

Leviathan won two awards - for Best Actress and Best Supporting Actor - after having been nominated in 11 categories.

Moreover, the Locarno prize-winner The Fool by Yuri Bykov received the NIKAs for Best Screenplay and Best Supporting Actress, while the award for the best film from CIS and the Baltic states went to the Ukrainian Cannes success The Tribe by Myroslav Slaboshpytskiy.

In addition, Ivan I. Tverdovsky was named Discovery of the Year for his feature debut Corrections Class which had won awards at such festivals as Karlovy Vary, Cottbus and Marrakech last year.

In addition, Alexey German Jr.’s Silver Bear-winning Under Electric Clouds will be shown in the Competition section ¨out of competition¨.

Russian sales agent Antipode Sales & Distribution has picked up its third title from outside of the former USSR for international sales.

Anton Mazurov’s company will handle distribution rights for In Your Arms by Samanou A. Sahlstrøm, which won the FIPRESCI Prize and the Dragon Award for Best Nordic Film at this year’s Göteborg Film Festival.

Antipode had previously added the Swedish film Stranded In Canton, which will have its US premiere at the Tribeca Film Festival this month, and the Berlinale Forum title Brazilian Dream to its line-up.