Other winners include The Tribe, a documentary about Syria and Catch Me Daddy actress Sameena Jabeen Ahmed. 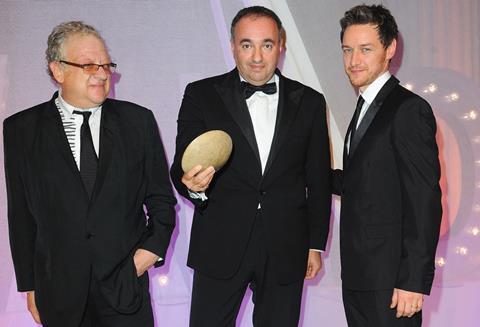 It saw off competition from the likes of Peter Strickland’s The Duke of Burgundy, François Ozon’s The New Girlfriend and Julius Avery’s Son of a Gun, starring Ewan McGregor (click here for full list).

Leviathan tells the tragic tale of conflict between an individual and a corrupt system in a small Russian town.

It marks the fourth feature from Zvyagintsev and is Russia’s submission for the Best Foreign-Language Oscar. The film debuted at the Cannes Film Festival in May, where many expected it to win the Palme d’Or, instead winning Best Screenplay.

It will be released in the UK by Curzon.

Jeremy Thomas, BFI Fellow and president of the Official Competition jury, presented the award and said: “We were all very engaged by the 12 films selected for Competition and really admired many of them, there were extraordinary stories and impressive images.

“But there was one film that we were unanimous in wanting to award Best Film, Leviathan directed by Andrey Zvyagintsev. Its grandeur and themes moved all of us in the same way.”

The jury also commended Celine Sciamma’s Girlhood about a young woman’s search for identity in the underprivileged suburbs of Paris.

The winner of the Sutherland Award in the First Feature Competition was another Cannes favourite, Myroslav Slaboshpytskiy’s Ukrainian drama The Tribe.

The award is presented to the director of the most original and imaginative first feature in the festival.

Acted entirely in sign language, the film centres on a deaf mute teenager who struggles to fit into a boarding school for young, deaf people.

Actor Ian Hart introduced the nominations and the winner was announced by producer Luc Roeg, whose own film We Need To Talk About Kevin won the Best Film Award at LFF in 2011.

Roeg said: “The Tribe distinguished itself as the most original and powerful of all the contenders. The young non-professional cast were all exceptional, but special mention must go to Yana Novikova.

“Slaboshpytskiy makes an audacious and highly accomplished debut as writer/director and has marked himself out as a true auteur.”

The film debuted at Cannes, where it won the Critics’ Week Grand Prize, the France 4 Visionary Award, and the Gan Foundation Support for Distribution prize.

The jury also commended Naja Abu Nowar’s Theeb about orphaned brothers on a treacherous journey across the desert in the far reaches of the Ottoman Empire on the eve of the Arab revolt.

The film won the Venice Horizons Award when it debuted at the Venice Film Festival last month.

As well as Hart, Roeg’s fellow jurors were the actress Hermione Norris, producer and president of production at eOne Xavier Marchand and the director, cinematographer and writer, Ben Rivers.

Directed by Ossama Mohammed and Wiam Simav Bedirxan, the film is a look at first-hand video accounts of violence in modern-day Syria as filmed by activists in the besieged city of Homs.

Announcing the winner was jury president, the director, writer and producer Sophie Fiennes, who said: “The jury were deeply affected by this film.

“Ossama Mohammed and Wiam Simav Bedirxan’s portrait of Syria is both unflinching and poetic. It is hard to watch, because the fact of war is and should be unbearable.

“Bedirxan’s passionate and courageous quest to be a reliable witness, while trying to comprehend and survive her desperate situation in Homs, is profoundly moving.

“Ossama Mohammed’s exile in Paris, resonates with our own safe distance from this war, but the miracle of the film is how it engages us.”

The documentary debuted at Cannes and has played at the Locarno and Toronto film festivals among others.

The Best British Newcomer Award was won by actress Sameena Jabeen Ahmed for her role in Daniel Wolfe’s Catch Me Daddy.

The prize is presented to the most promising writer, actor, producer or director with no previous track record in feature films or television.

In Catch Me Daddy, Jabeen Ahmed plays Laila, a girl on the run from her family hiding out in West Yorkshire with her drifter boyfriend Aaron.

Jury president and producer Finola Dwyer announced the result and said the decision was “unanimous”.

“Sameena’s performance was very assured, confident and fearless,” said Dwyer. “In the lead role of Laila, Sameena’s range of emotion was breathtaking; she was the heartbeat of the film.”

As previously announced, this year’s BFI Fellowship was presented to the British film director Stephen Frears.

The honour was presented by British playwright and screenwriter Sir David Hare who said: “I can’t think of anyone who’s made a richer, more diverse or more consistently intelligent contribution to British film in my lifetime.”