Festival attendance up 7.5% with more than 163,000 breaking audience records. 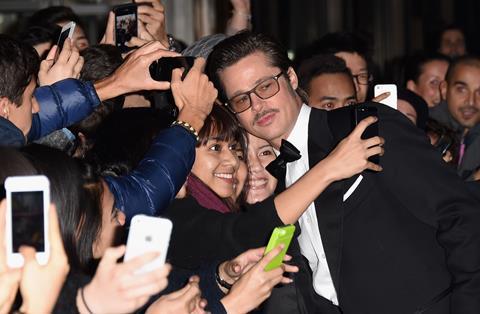 The 58th BFI London Film Festival (Oct 8-19) closed last night with the European premiere of Fury and reported the highest ever attendance in the festival’s history.

The Imitation Game and Fury were screened simultaneously screened to 50 cinemas across the UK, with the red carpet for the opening night streamed online for the first time, notching up more than 16,500 views on the day.

Citizenfour, a documentary about NSA whistleblower Edward Snowden, had its UK premiere at LFF on Friday night (Oct 17) in an event that was broadcast live to 70 cinemas across the UK and included a Q&A with director Laura Poitras.

LFF hosted 772 filmmaker guests (up from 670 in 2013) over half of which came from international territories. Industry screenings and events were attended by 1,107 industry delegates and 906 press delegates.

Highlights of the festival included an industry keynote from Jeffrey Katzenberg, CEO and co-founder of DreamWorks Animation; and a new talent event that saw Screen International’s UK Stars of Tomorrow initative partner with the LFF and British Council to give an opportunity for rising stars to meet key players from the international film industry.

The LFF Education team continued to work with partners including The BFI Film Academy, The London Film School and the National Film and Television School to deliver a series of events and workshops for film students aspiring to make it in the industry.

The programme offered 4,485 students a look behind the scenes - from following the production processes of Mr. Turner and ‘71 with key members of the crew, to looking inside the Digital FX industry and being part of a festival jury with The Festival Young Jury project.