James Schamus working on projects from 'micro' to 'quite huge' 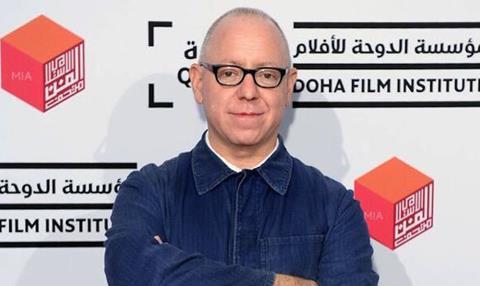 Writer/producer and former Focus Features head James Schamus, who recently directed his first short, That Film About Money, and his first feature, an adaptation of Philip Roth’s Indignation, told Screen that he plans to direct again.

While he figures out what his next directing project will be, Schamus is busy assembling a development and production slate at his New York-based company, Symbolic Exchange.

“I’ve stayed more or less under the radar since I left Focus [in October 2013]. I had the opportunity to build up my own little company, I have a lovely arrangement with a company called Meridian Entertainment in China,” Schamus told Screen while attending this week’s Qumra event in Doha.

“I’ve kept my staff extremely small. In the next few months we’ll have announcements about movies that we’re helping to make, finance, produce, develop, etc. I’m very pleased. We’re starting with projects at very homemade scale and we are developing across a range of budgets from micro to quite huge. And having fun.”

From Chinese and other finance sources, his company has both a production fund and development fund. “We have been developing lovely stuff this past year… We are starting to finance pictures now, which we will be announcing.”

He said his attendance at the Berlinale last month with three films was a signal of more activity to come. He was in Berlin with Indignation in Panorama Special, as an executive producer on Israeli-Palestinian story Junction 48, also in Panorama Special, and as a producer on Competition title Alone In Berlin. “This time next year there will be a few more of those,” Schamus added.

He noted that one new project was already shooting now under the radar. “It’s by a wonderful emerging director, a young woman who I think is a genius.”

And of course there is also Schamus’ next project with director Ang Lee, his frequent collaborator, on boxing story Thrilla In Manila, about the famous 1975 match between Muhammad Ali and Joe Frazier.

While Lee is spending the rest of this year finishing Billy Lynn’s Long Halfime Walk for Sony Pictures, Schamus and the project’s new partner Jeff Robinov at Studio 8 are planning Thrilla, which will likely shoot in 2017.

“It is still early stages, really the budgeting, the scheduling, the effects, the methodology has been already a year-long journey for that film, but it is coming to fruition under the tutelage of the team that Jeff put together. They’ve been incredible partners to work with. We’ve had to reopen and revisit every assumption from the first phase of development,” Schamus said.

The film is not cast yet.

In his Qumra masterclass, Schamus also revealed he is developing a TV series with European partners, but characteristically wouldn’t be drawn to provide more details. “I’m just a lemming,” he joked about moving from film into TV.

“TV has the potential to play with the narrative form,” he said. “With TV, I still feel like the possibilities are bigger than the rhetoric around it.”

Schamus is attending the Doha Film Institute’s Qumra event as one of this year’s five Masters, who screen one of their films (in his case, Crouching Tiger, Hidden Dragon), deliver a masterclass and advise young talents on individual projects.

Schamus told Screen: “I spent a lot of the last day going over the projects of the filmmakers I will be meeting with. It’s a mixed bag. A lot of it is that you really have to listen to these young people and figure out what their goals are. Honestly, on some of this stuff, they don’t need me. Some of it is already at a very high level, and some of it is people who are just starting at the first steps.”

He was inspired by the “wildly diverse” frames of reference he finds amongst emerging talents from Arab world.

“Some of the young filmmakers here are often the most cinema-literate people you meet. They are digging deep precisely because they are not awash in that kind of careerist mentality that surrounds a lot of their North American and European peers.”