Mike Brune stars in the SXSW Narrative Feature Competition selection as Foster Kalt, a toy inventor who reflects on his lifelong obsession with one Sylvia Frank. 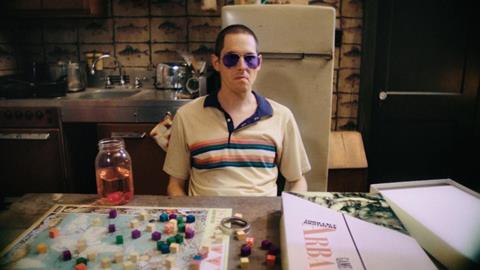 Ahead of the world premiere on Monday, Adam Pinney, a member of the Atlanta film collective Fake Wood Wallpaper, talks to Jeremy Kay about stunted adolescence, alternative history, and his twisted take on Cupid.

Where did you get the idea for this?
Originally, it was meant to be an interview film, inspired by interviews with eccentric, notoriously difficult celebrities like Lou Reed and Klaus Kinski. The toy aspect evolved from a one-act play I wrote about a Rubik’s Cube competition. I threw in a little alternative history and wrapped it around a story of guy who loves a girl who hates him, which stemmed from wanting to make a film about someone who is a bit of a stunted adolescent, a way I sort of feel about myself. In the writing it became more of a critique than an examination. So, it’s your basic first film cliché of throwing every idea you have had since you were 16 in one movie, haha.

Was the notion of the obsessive / stalker as pronounced in your early drafts as it appears in the film, or did this element change significantly as you revised the script?
It was always there, but it became more pronounced as the writing went on. I really did not want you to feel sorry for this character, so it was important to exaggerate his obsession. What Mike Brune, the actor who plays Foster Kalt, brought to it just took it somewhere even crazier. I would have never thought the character would act like that, but it was so organic and unusual to watch on set, that we went with it, and I’m so glad because it is such a great portrayal of how this character should be seen.

Clearly Foster is an obsessive character, but I’m interested in why you made him a toy inventor who doesn’t really invent toys. Is it something to do with self-delusion and manufacturing reality?
Being a toy inventor or even aligning himself with toys, and board games, ties back into him being childlike in character. The fact that he is a fraud of sorts really is as simple as him doing what he thinks will make this woman love him. I didn’t want his success to be something he meant to happen or something he even tries to take advantage of; he really just wants the girl, and if he has to be a liar, then he will be that.

Why does the story attribute or credit inventions to people who did not actually make them?
The film does have a fantastical element to it, one where your assumptions about the world that exists within it are questioned. Though not emphasised, it is a film that has an alternate history, and I’m excited to see how audiences react to that.

What is the significance of the arbalest?
An arbalest is a large medieval crossbow. It can also refer to the person wielding the crossbow in some circumstances. One way to look at it is that Foster is a Cupid-like character, who used his bow to inflict desire in his targets, and Foster is trying to do whatever he can to make Sylvia love him, no matter the cost.

Where did you find Mike Brune? He is fantastic and deserves to break out
Mike Brune and I met in college, along with Alex Orr, our producer, and Hugh Braselton, our DP. We started a film collective called Fake Wood Wallpaper and have been working together ever since. Mike was in our first feature, Blood Car, that Alex directed back in 2007. Mike also has a feature he directed under his belt called Congratulations! I always had Mike in mind when I was writing this and though it is something completely different than he has ever done, I knew he would bring something special to it. He totally blew me and everyone away with his performance and I’m so thankful he was a part of this project.

Where and when did you shoot?
We shot mainly on sets in Atlanta, Georgia, in mid to late 2014.

How did you get the financing and what was the budget?
The film was independently financed, and is around a million dollar budget.

Is there a play on words with his name? I see ‘Foster Kalt’ contains the word ‘Stalker’
There is now, haha. That was not intentional, but I will take credit for that if anyone asks.

The music is memorable and evokes pop and rock styles from the last half-century. Who are the composers?
I really lucked out on music for this film. All the music in the film was written and composed by Thomas Barnwell and Ian Deaton. I had place holder music in the rough cut – everything from Simon and Garfunkel to Iggy Pop – and because music is so expensive, we tried to recreate those sounds and feelings. Thomas and Ian are exceptionally talented and they wrote these songs that feel as if they were written and sung in the 60’s and 70’s. On top of that, they created amazing themes for the characters and a soundscape that adds so much to the finished film.