The recent world premiere at the trinidad + tobago film festival of the musical romance culminates a nine-year journey by Claire Ince. 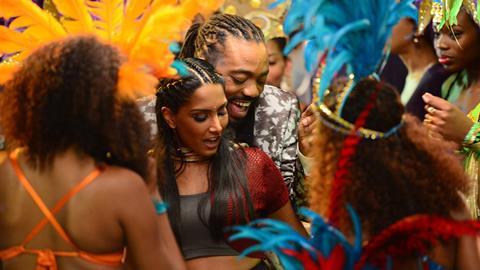 The Barbados-born writer-producer set out to tell a story rarely told and the result is Bazodee, a Caribbean-infused tale of a strong woman who makes sacrifices for her family.

Natalie Perera stars as the daughter of a Trinidadian businessman who on the eve of her wedding falls for a despondent former hit-writer played by soca superstar Machel Montano in his acting debut.

The $2m romantic musical shot in Trinidad and Tobago from December 2014-January 2015 and blends Caribbean and Bollywood flavours with Montano’s songs.

Ince, her husband and partner Ancil McKain at New York-based Indiepelago Films, Montano and London-based Perera talk to Jeremy Kay about getting the production on to screens.

How did you start the whole thing begin?
Claire Ince: It was one of the biggest cold calls of my life because I’d graduated from NYU film school and wanted to write something that reflected my experience of Caribbean life. So I thought about a musical and I thought about Machel telling the story through his wonderful music. I didn’t know him and approached him with the idea in 2006.

How did that go?
CI: I called him and from the very beginning he was very excited and said, ‘You don’t have to sell it to me, I want to do this.’ Ancil’s from here and it was true passion that drove us and in Machel we had someone who championed it. When Elizabeth Montano [Montano’s mother] came on board as executive producer we had the full force.

Machel, how did you react when Claire approached you with the idea?
Machel Montano: When Claire started telling me she loved my songs I really saw this as an opportunity to expand my purpose. At that point there was no storyline but when she sent the script to me it was fun and entertaining, there was humour and romance and deep meaning about culture and human behavior and love.

How did director Todd Kessler get on board?
CI: Todd had a production company I had worked for. It was important to make an authentic Caribbean film that would bring out the best from the story. I approached him and he loved it and didn’t think it was a story that had been told enough in terms of a woman who makes sacrifices for her family.

Ancil McKain: Todd is a person who actually listens to people’s opinions and he was wonderful to work with.

What were some of the financing elements on Bazodee?
CI: We used the local tax incentives - they offer a 55% rebate on skilled labour and a 35% rebate on services.
AM: And local investors. People here are now seeing the potential for film.

How did you choose the songs for the movie?
MM: I Forget was the one original song I wrote for the movie and the others were suggestions from Claire and I. My songs have always been about real unity and I was impressed that she slipped these songs into the story. It gave me a fresh perspective on my music.

What did you think of yourself on screen?
Machel Montano:It was surprising to me because I’m such a procrastinating perfectionist and like to release and make things proper.
Natalie Perera: I usually hate it but I was smiling the whole time. I suppose I’m doing my job and acting because it felt like I was watching someone else. I couldn’t stop smiling.

At the world premiere here you spoke of how proud you were of the local crews and technicians
MM: I always think of us having to go to the US and Europe to see how things are done and how we never have the technology and are late to rise to the professional bar. I hadn’t been exposed much to the film industry and didn’t know if our industry was up to the level. But they worked so well side-by-side with international people who came and were impressed by these people. I could see our crews felt pride doing something serious. That was our signal to the government to invest more in these jobs. We can have more opportunities and we have our stories to tell.

Ancil, what does this say about the local level of expertise?
AM: We had an amazing experience. Everyone was always on time, giving their best. When I grew up here my dad used to sell cars and would fix a car with a piece of hosepipe. There’s that resourcefulness here and everybody did what they had to do. There’s a lot of production happening. After we finished people went from project to project to project. We brought in a few international keys to head departments and they were impressed.

Tell us about soca
MM: Soca music really is the soul of calypso. It was always about the message of the people of the street. It became the soundtrack of Carnival. Soca is a high-energy music to make you jump and dance and forget your troubles. It’s like the pied piper himself. Now it’s getting much more assimilated into life and love and happiness and celebration and joy. It’s a deep-rooted cultural music. It’s become accepted as a world beat.

How did you get into the scene?
MM: I started performing soca when I was very young and was accepted by the older music community, but I could see other people were singing reggae and rap and knew I had to work out how to make this music popular.

Natalie, you have strong Sri Lankan ancestry and live in London. What is your professional background?
NP: Acting for me is a disease. I was classically trained. I wanted to find a way of telling stories that wouldn’t upset my parents, who wanted me to be a doctor or a lawyer. So I went to RADA and wanted to direct but everybody told me I should act and I went to Central School of and did training in theatre. Once you get those fundamentals you can adapt to anything else. Before this I did a German feature called Der Koch.

What drew you to the role of the film’s lead character?
NP: Female lead. Female Asian lead. Could it get any better? That was the first thing, and then you are going to be shooting in Trinidad and Tobago. It was a page-turner. It was so much fun and was laugh-out-loud in places and a musical. I was learning so much about this culture. And I got to work with this soca king. It was a no-brainer.

It must have been a joy to receive a script like this
NP: You need to tell your own stories. Diversity is a real issue in London and people are constantly being stereotyped. At the moment it’s constantly about one type of Asian [representation] and a lot of people don’t know you have island Asians out there.

Why didn’t you go into musical theatre?
NP: I always wanted to. When I was a budding actor I worked in a children’s place called Gymboree and sang and sang and sang and developed a vocal nodule. Before I auditioned for this I spoke to a friend who told me, ‘You have a new voice now, this husky voice. Use it.’ Then I met Machel and started with him and that was a training in itself.

What was it like to work with Machel?
NP: At first it was frightening to work with such a massive celebrity in his field and to sing his music. That was mortifying. He made me feel really comfortable and is really good at teaching. It was about getting the language and getting the rhythm – the rhythm was probably the toughest thing. Then it was like an acting exercise and it became fun. My concern was I wouldn’t be able to match his energy I was getting really drained by the sun because in London I’m not use to that. He encouraged me to use the sun as my energy. That note was really useful?

And working with Bollywood legend Kabir Bedi?
NP: It was awesome. He would come over and give me notes. He’s a big guy as is the guy who plays my fiancé and would tell me where to stand and to find my light. Kabir’s style is big and for me that was familiar because I come from theatre.

Machel, have you caught the acting bug now?
MM: Definitely. I have got a few calls. They have asked me to play a small role in Doubles With Slight Pepper that Spike Lee is executive producing. [New York-based Trinidadian Ian Harnarine is adapting the feature version from his short of the same name that earned the Best Canadian Short Film prize in Toronto 2011.]