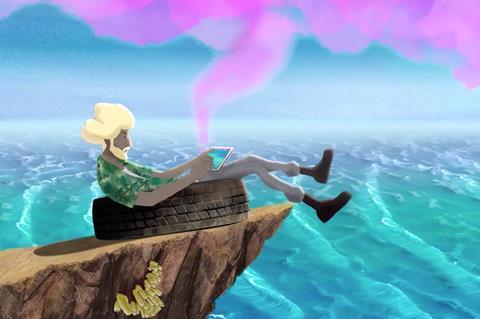 French distributor Eurozoom has acquired French rights to Romanian director Anca Damian’s The Island ahead of its screening in competition at the Annecy International Animation Film Festival (June13-18).

International sales of the film are handled by Brussels-based Best Friend Forever (BFF).

The Paris-based distributor has a long track record in theatrically releasing animated features in France. Past releases include award-winning Japanese titles Your Name by Makoto Shinkai and The Wolf Children by Mamoru Hosoda as well as Spanish director Salvador Simo’s Buñuel in the Labyrinth of the Turtles. It has set an autumn release for the film.

It is among 10 titles competing in Annecy’s main competition this year.

The work is a contemporary adaptation of a 1979 play by late Romanian writer Gellu Naum, which in turn was inspired by Daniel Defoe’s 1719 classic novel Robinson Crusoe. In his modern incarnation, the work sees Robinson transposed into a doctor living in voluntary solitude on an island invaded by migrants, NGOs and guards.