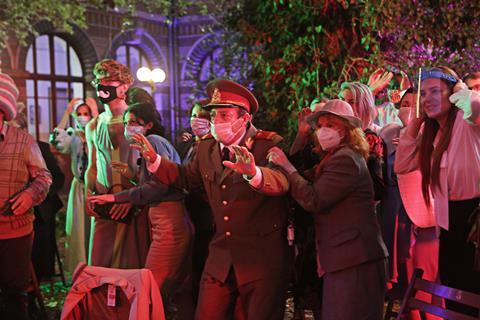 The social satire was shot in Romania during the summer of 2020 during a lull in the pandemic, and stars Katia Pascariu as a school teacher who finds her career and reputation on the line after a personal sex tape is leaked onto the Internet. Heretic Outreach handles sales.

Romanian filmmaker Jude was last in competition at the Berlinale in 2015, when he won the best director Silver Bear with Aferim!.

Traditionally the awards are handed out during a glitzy ceremony at the Berlinale Palast. But for the 71st edition of the festival, which ran as an industry-focused, online-only edition from March 1-5, the Competition and Encounters prizes were revealed via a video presentation by the juries, hosted by artistic director Carlo Chatrian.

It saw the Berlinale award its first ever gender-neutral acting awards, replacing the best actor and actress prizes.

The Silver Bear for best director was presented to Hungary’s Dénes Nagy for his feature debut Natural Light, about a Hungarian army officer in the Second World War.

The Silver Bear for outstanding artistic contribution was awarded to Yibrán Asuad for editing A Cop Movie, directed by Mexcio’s Alonso Ruizpalacios, for which Netflix has acquired world rights.

Five of the jury members saw the films in person in a cinema in Berlin. Rasoulof watched the films from Tehran as he remains under house arrest.

The Berlinale is planning to hold a physical awards ceremony to hand out the honours during its Summer Special event, set to run June 9-20.

The film explores the diversity of Paris through a trip on its suburban trainline. French filmmaker Diop broke out with her 2016 documentary On Call. Totem Films is handling sales.

The Encounters section was introduced last year to support new voices in cinema.

Other winners included Ramon Zürcher and Silvan Zürcher (The Girl And The Spider), and Denis Côté (Social Hygiene), who jointly picked up the director award. A special mention was given to US feature Rock Bottom Riser, directed by Fern Silva.