Aims to promote creative and cultural exchange across film and television. 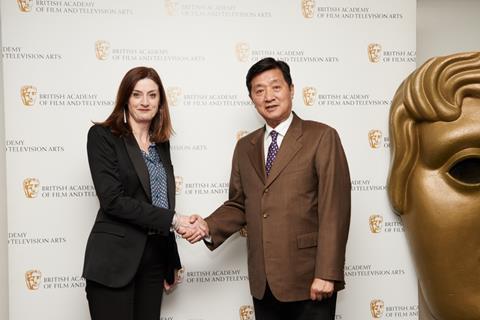 The British Academy of Film and Television Arts (BAFTA) and leading Chinese film school the Beijing Film Academy have signed a Memorandum of Understanding (MOU) confirming their intention to work together to support greater collaboration between British and Chinese film and television students, and industry professionals.

BAFTA CEO Amanda Berry and Zhang Huijun, president of the Beijing Film Academy, signed the MOU at a meeting at BAFTA’s headquarters in London on Thursday (Dec 17).

The newly formalised relationship is part of BAFTA’s ongoing programme of activity that aims to encourage creative and cultural exchange between the UK and China, bringing together individuals from the film, television and games industries to share their skills and expertise.

Areas of cooperation between BAFTA and the Beijing Film Academy are likely to include student scholarships, research, and learning events such as masterclasses.

The agreement comes as BAFTA prepares to expand its scholarship programme - which began in Hong Kong - into mainland China, enabling Chinese and British citizens in financial need to study as an international student in the UK or China respectively.

Potential applicants can register at http://bit.ly/1Exfa4G to be informed when applications open in early 2016.