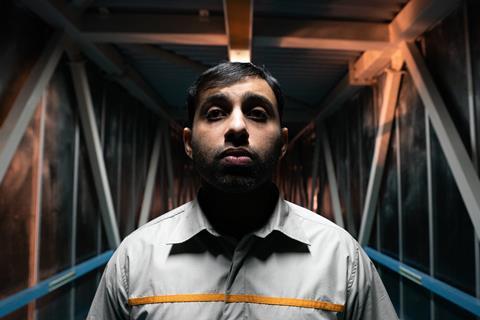 Bankside will debut the film to buyers in Cannes; Screen can reveal a first-look image at the film (above).

Birchanger Green centres on a man living a small, lonely life working nightshifts at a motorway service station. On hearing his estranged father has died, he finds himself in search of answers and starts to become convinced that he descends from an alien race.

The film is produced by Michelle Stein for Escape Films. It was developed and co-financed by Film4, the BFI and Screen Yorkshire.

The cast is led by Faraz Ayub, whose credits include Apple series Suspicion and Shekhar Kapur’s upcoming feature What’s Love Got To Do With It?. Alongside Ayub are Natalie Gavin, Ali & Ava’s Claire Rushbrook, Simon Nagra, Steve Oram and Jeff Mirza.

The executive producers are Kristin Irving for the BFI, Daniel Battsek, Ollie Madden and David Kimbangi for Film4, and Caroline Cooper Charles for Screen Yorkshire.

“Bankside have shown such passion for the project for so long that it’s brilliant to finally have them on board,” said Hussain.

“Moin is such an extraordinary talent whose work we have long been enthralled by,” said Bankside founder and managing director Stephen Kelliher. “[In Birchanger Green] he deftly weaves together an intensely emotional story about identity and belonging through the lens of a science-fiction film.”

Hussain was named a Star of Tomorrow in 2018; with Stein included as a producer in 2009. Hussain’s shorts Real Gods Require Blood and Naptha played in Cannes Critics’ Week in 2017 and 2019, while Birchanger Green has been recognised by the Cannes Cinéfondation and John Brabourne awards throughout its development.