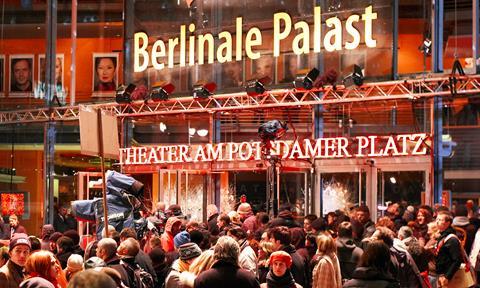 Ildikò Enyedi’s Hungarian feature On Body and Soul - the unusual love story of two damaged souls trying to make contact in a harsh world - was the big winner on the night taking home the Golden Bear for best film in the Competition as well as the Ecumenical and FIPRESCI juries’ prizes for best film in the Official Competition and the Berliner Morgenpost Readers’ Award.

Enyedi’s film - which is handled internationally by Berlin-based sales agent Films Boutique and had been hotly tipped for the Golden Bear  - is the second Hungarian film to win Berlin’s top award after Márta Mészáros’ Adoption in 1975.

Enyedi, who returned to Berlin from Budapest at the crack of dawn on Saturday to collect her award, is the fifth woman filmmaker in the Competition’s history to garner the Golden Bear after Mészáros, Russian filmmaker Larisa Shepitko with The Ascent in 1977, Bosnia’s Jasmila Zbanic with Grbavica in 2006 and Peru’s Claudia Llosa with The Milk Of Sorrow in 2009.

Before announcing the winner of the golden statuette, jury president Paul Verhoeven told the audience that they would be seeing ¨two people connected in quite an amazing way. The jury fell in love with this movie not only because of its superior craftsmanship, but because it reminds us of  one word we use too easily: compassion.¨

¨We wanted to present you a very simple film like a glass of water,¨ Enyedi explained. ¨It was risky, all of my team believed in it, but we couldn’t know if the audience would join us because this film is only approchable with a generous heart.¨

Saturday’s awards ceremony in the Berlinale Palast at Potsdamer Platz saw several of the filmmakers making politically charged statements during their acceptance speeches: Esteban Arrangoiz Julien, the winner of the Silver Bear Jury Prize for his short Reverie In The Meadow, drew attention to the case of disappeared Mexican students, while Raed Andoni received the first Glashütte Original Documentary Award, endowed with €50,000, for his documentary Ghost Hunting and took the opportunity to remind the audience of the tough conditions often facing Palestinians in Israel.

Bestowing the inaugural documentary prize filmmaker Laura Poitras told the audience that contrary to recent Donald Trump comments the press are not the enemy of the people. “We are enemies of nationalism and exclusion,” she added.

¨We have to fight the dark ages with beauty, with elegance and poetry,¨ said Chilean director Sebastián Lelio when receiving the Silver Bear for best screenplay for A Fantastic Woman and dedicated his award to ¨the courageous and fantastic woman at the centre of this film, Daniela Vega¨, who then joined him and co-screenwriter Gonzalo Maza on stage.

Accepting the Alfred Bauer Prize for her latest feature Spoor, which was co-directed with her daughter Kasia Adamik, veteran Polish director Agnieszka Holland echoed Lelio’s sentiments: ¨We are living in very difficult times right now. We need the new perspectives, we need movies that are brave and touching the subjects that are important for our planet.¨

Festival director Dieter Kosslick drew attention to the case of German-Turkish journalist Deniz Yücel, writer for Die Welt, who was taken into custody in Turkey on Friday and accused of being a member of a terrorist organisation.

The Panorama and Generation sections revealed winners including Insyriated and I Am Not Your Negro.

The Berlinale also announced its 2018 dates: February 15 - 25, which is one week later than this year’s edition.

On Body And Soul by Ildiko Enyedi

Aki Kaursimaki, The Other Side Of Hope

Min-hee Kim, On The Beach At Night Alone

Reverie In The Meadow

I Am Not Your Negro

The Grand Prix of the Generation Kplus International Jury for the Best Film: ex aequo

The Special Prize of the Generation Kplus International Jury for the Best Short Film: Aaba (Grandfather)

The Grand Prix of the Generation 14plus International Jury for the Best Film: Shkola nomer 3 (School Number 3)

Special Prize of the Generation 14plus International Jury for the Best Short Film:

The Jungle Knows You Better Than You Do

Special Mention: U Plavetnilo (Into the Blue)

Prizes of the Ecumenical Jury:

On Body and Soul

Special Mention:
I Am Not Your Negro

Prizes of the FIPRESCI Jury

On Body and Soul