Initiative will enable indigenous people to “flourish as other Canadians do”. 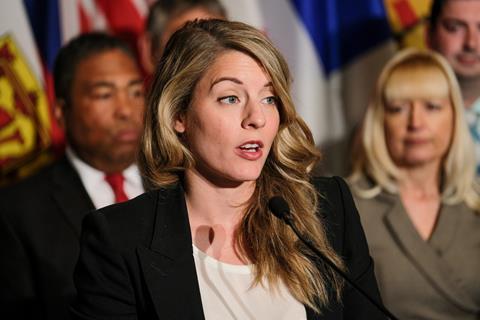 Backed by the Aboriginal Peoples Television Network (APTN), the Canadian Broadcasting Corporation/Radio-Canada, the Canada Media Fund (CMF), Telefilm Canada, the Canadian Media Producers Association, and the National Film Board of Canada, the office will support the development, production and marketing of indigenous content.

The project is the result of a process set in place in January by indigenous governance consultant Marcia Nickerson. The partners will now look to hire an executive to oversee strategic objectives and operations.

The office will work with broadcasters, distributors, training institutions and federal funders to implement a long-term strategy supporting all levels of talent development, short and feature script development, TV and digital media, and training.

“Too often, indigenous creators have faced systematic barriers in the industry that have made it difficult to share their stories,” Joly (pictured) said. “The creation of the Indigenous Screen Office will help address these barriers, provide direct support to creators and showcase Indigenous content in Canada and on the world stage.”

“The CMF has the largest programme in support of Indigenous content in the country,” CMF president and CEO Valerie Creighton said. “While we led this initiative to consider future directions for our own programme, it was the leadership of Marcia Nickerson, the discussion with indigenous creators, producers and stakeholders from coast to coast to coast combined with the extraordinary collaboration of the partners that resulted in our collective ability to launch this initiative in order to address the issues faced by the Indigenous creative community in Canada’s screen-based sector.”

Creighton said the initiative stemmed from the At The Crossroads report authored by Jeff Bear and commissioned by the federal government and several agencies in 2004. “Very little has changed since the recommendations of that report, 13 years ago,” she added.

APTN CEO Jean La Rose said the Indigenous Screen Office would ensure the stories of indigenous Canadians would reach a wider audience and allow the people “to flourish as other Canadians do”.