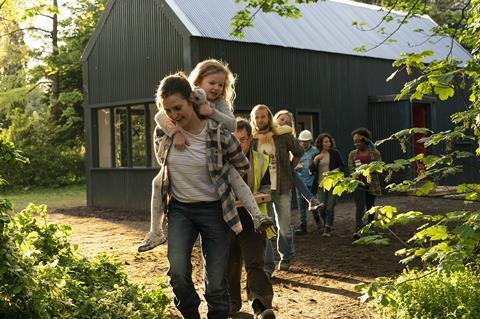 These join previously arranged deals with Element Distribution for Ireland and Picturehouse Entertainment for the UK.

Cornerstone is handling worldwide sales on the project, and will screen first footage at this week’s American Film Market (AFM, November 6-13).

It has also released the first image from the film, above.

The film was co-developed by The Favourite producers Element Pictures from Ireland and the UK’s Merman. Ed Guiney and Rory Gilmartin produce for Element, with Sharon Horgan for Merman. Executive producers are Clelia Mountford for Merman, Andrew Lowe for Element, Rose Garnett for BBC Films, Mary Burke for the BFI, Lesley McKimm for Screen Ireland, and Thompson for Cornerstone.

The film was originated by Irish actor Clare Dunne, who plays the lead role and co-wrote the screenplay with Malcolm Campbell.

Herself centres on Sandra (Dunne), a mother who looks to build her life from scratch in order to provide a happy home for her two young daughters, away from a possessive ex-partner.

Further cast includes Harriet Walter and Conleith Hill. The film shot on location in Ireland, and is currently in post-production in London.